Keeping an ‘eye’ on your valuables 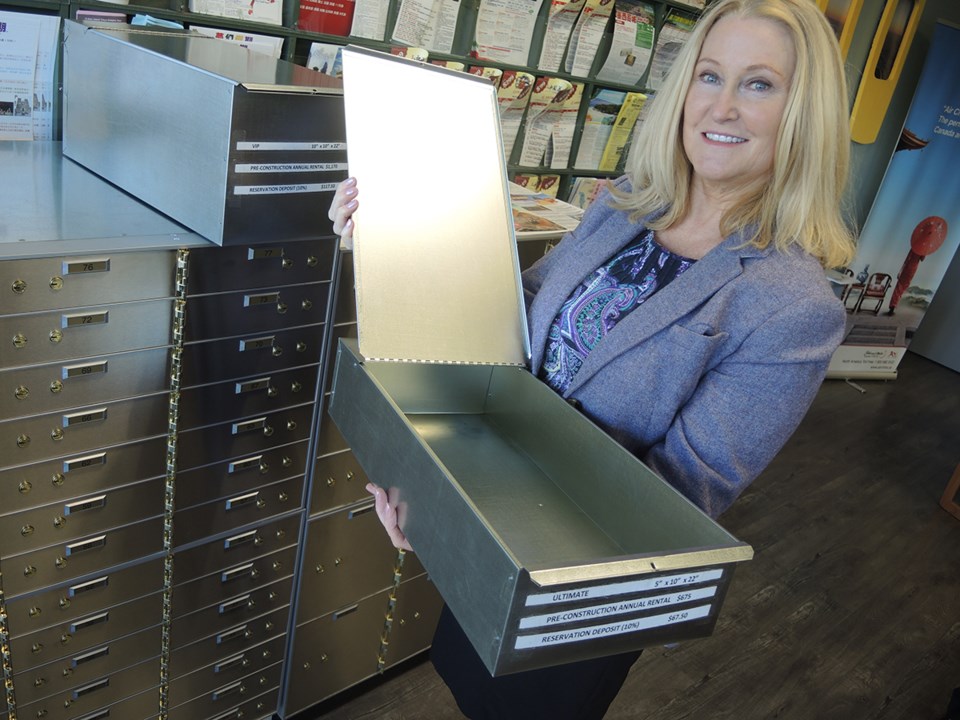 Katherine Thomas, of International Private Vaults, displays one of the larger safety deposit boxes customers can choose at their Park Road facility — the first of its kind in Canada — when it opens in May. Photo by Philip Raphael/Richmond News

A new Richmond business is hoping to prove that a person’s eyes are more than just a window to their soul — they can also be a secure, personalized key to access some of their most valued possessions.

When International Private Vaults Inc. (internationalprivatevaults.com) opens in May, it will be using an advanced biometric device to match the pattern of a client’s iris with one on record to allow access to their safety deposit box inside a custom made vault at its Park Road location.

According to Bill Thomas, the company’s president and CEO, using an iris image is an extremely secure method.

“It’s the one thing that thieves cannot steal. The iris is very unique to every person and doesn’t change over the course of a person’s life,” he said.

In contrast, a person’s retina can change over time due to age and disease.

“It’s (iris) more like a photo ID. We capture an image of the iris and its components — there are more than 250 data points on the iris. That’s more than on a fingerprint.”

Each safety deposit box will be kept inside a custom-made vault with six-inch thick concrete and steel walls that is being made by the American Vault Corporation in Waco, Texas.

Before the vault is installed, some modifications to the site had to be made.

“The floor has to be reinforced because we’re talking about 100 tons, 350,000 pounds. The vault itself is about 250,000 pounds, and the contents another 100,000 pounds or so,” said Thomas, adding the site had to be studied by a structural engineer, who installed mini pilings to shore up the concrete flooring.

So, how secure will it be?

Motion sensors and heat detectors will also be used in and around the vault.

“You’d need a lot of time and some very sophisticated tools to break into it,” Thomas said. “Our insurance company agent kinda smiles when he says these type of vaults don’t get broken into.

“This is not like Ocean’s Eleven. There hasn’t been a vault like this breached in probably 30 years.”

An array of 20 video cameras will monitor the facility inside and out, plus guards — all unarmed due to Canadian laws — will be stationed inside the building to provide another layer of security.

Clients can choose from a variety of box sizes, starting with three by five-inches, right up to a 10 by 10-inch box, which Thomas said is much sought after and in rare supply from traditional providers, such as banks.

“The demand for the boxes actually exceeds the supply,” Thomas said. “Yes, banks have boxes. But a lot have waiting lists and if you could get one, it’s generally the smaller ones which you’d have to fold papers to get them in.”

That’s one of the reasons why Thomas, a chartered accountant, decided to get into the business along with Katherine Thomas, a co-founder and vice president of IPV.

And while doing their research, they decided Richmond was the place to locate.

“The Asian population is attractive to us,” Katherine said, adding it’s often the high wealth population that require this type of service.

“We also need a dense population and a location that’s close to an international airport and hotels,” Thomas added. “A lot of people travelling overseas may need a short-term service that we can provide.

“Some clients will tend to go back home for maybe two to three months out of the year, so this will be the place for them to store their goods, rather than at home.”

The new service also allows clients to remain anonymous, if they choose.

“Because we’re not a bank, we’re not obligated to provide any other information other than what we need to have a secure operation,” Thomas said. “The iris scan is all we need to be able to ensure you are the only person that is allowed into your box.”

Plus, every customer is given explicit information of what cannot be stored inside their box. They include: food, explosives, weapons, drugs and child pornography.

To help maintain that, sniffer dogs will be used on the premises.