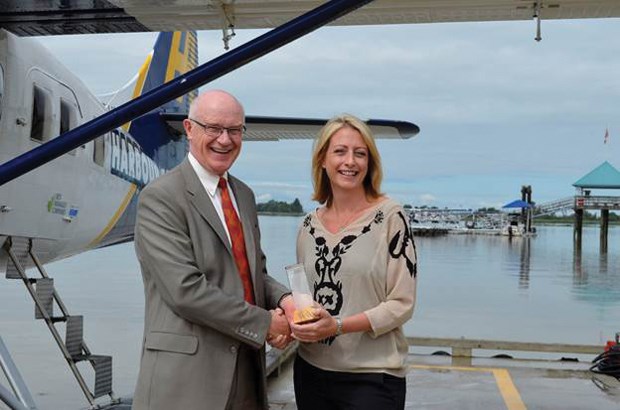 Sea Island-based Harbour Air recently got some recognition for its environmental efforts. On June 4 the Vancouver Airport Authority presented the float plane carrier with its 2015 Clear Skies Award which is granted to the organization that demonstrates outstanding enthusiasm and commitment in improving their environmental footprint by reducing greenhouse gas emissions, potable water consumption, waste and/or improving ecosystem health on Sea Island.

The airline adopted a street as part of the City of Richmond‘s Partners for Beautification program which includes a crew of volunteers cleaning up the Fraser River shoreline adjacent to the terminal on a bi-monthly basis.

It also participates in Bike to Work Week and promotes, S.P.Y week (Self Propel Yourself) to work week by encouraging employees to bike, walk, rollerblade to work.

Harbour Air is also a member of the Fraser Waterkeeper Alliance participating in community efforts to rescue marine life and protect rivers and streams. And it works with the Vancouver Aquarium Marine Mammal Rescue Centre program helping transport seal pups along BC’s coast to the rehabilitation centre.