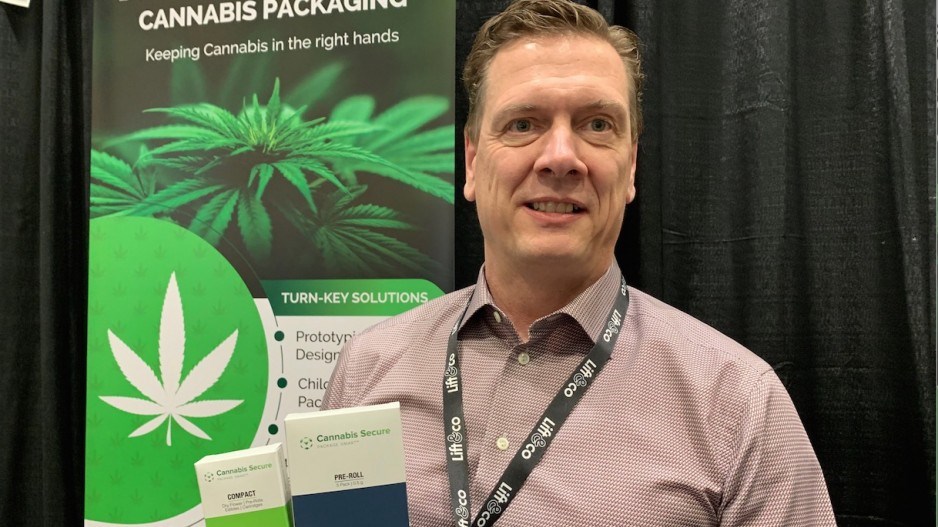 Bellwyck Packaging Solutions president John McVeigh holds some of his packaging products while he mans a booth at the Lift and Co. cannabis expo in January in Vancouver. Photo: Glen Korstrom

When Health Canada on Feb. 20 ends consultation on its proposed regulations for cannabis edibles, entrepreneurs will have to wait to see if the government was genuinely listening to critiques and is willing to incorporate some suggestions.

One major change that licensed producers are lobbying for is for the government to allow them to put more than 10 milligrams of tetrahydrocannabinol (THC) into individual packages of edible products.

Cannabis-laced chocolate bars sold illegally at unlicensed Metro Vancouver dispensaries often contain between 40 and 80 milligrams of THC, and some much more.

Having a 10-milligram maximum dose per package is wasteful because it is likely to require more packaging than necessary, according to the Cannabis Council of Canada, which represents licensed producers.

Zenabis Global Inc. CEO Andrew Grieve agrees, and told Business in Vancouver that he would like the freedom to offer products with higher doses of THC as one strategy to reduce packaging.

“We’ve been working really hard to reduce our packaging overall,” he said. “We’ve been making progress on that point. From a corporate social responsibility standpoint, we think it is very important to reduce packaging wherever possible.”

Grieve had wanted to produce large, child-resistant packages of products. Inside the secure bags would be small Hershey’s-Kisses-sized chocolates, or caramel edibles, containing 10 milligrams each, with minimal packaging.

Health Canada has said that such an arrangement would not be legal, and that each edible product that has 10 milligrams of THC would have to be sold separately in its own child-resistant packaging.

Not all licensed producers have a quarrel with the Health Canada packaging restrictions.

Tantalus Labs CEO Dan Sutton, for example, told BIV that, on a recent weekend, he had sampled a lab-tested 10-milligram edible.

He added that he has sampled 50 milligrams of THC in one sitting and found it “incredibly unpleasant.” He added that drugs such as Advil have a lot of packaging, and no one is complaining about that.

Several packaging companies declined to speak with BIV about the draft regulations for edibles, and whether they would benefit from requirements that there be more packaging.

Bellwyck Packaging Solutions president John McVeigh, however, said that he was not sure it would be true that smaller packages will be more profitable for his company.

“Smaller packages could be of a smaller cost, and larger packages a larger cost,” said McVeigh, whose Ontario-based company operates a labelling plant in Langley. “So I don’t know per se how much more beneficial it will be.”

He added that he has “no dog in the fight” and will remain focused on serving his customers regardless of what the regulations turn out to be.

Lawyers have told BIV that they do not expect the government to reveal its final regulations for cannabis edibles until May at the earliest.

The announcement of the final version, whenever it comes, will be the equivalent of a starting-pistol shot, commencing a sprint in which entrepreneurs scramble to put their products in compliance before Oct. 17, the last day the government can wait before making edible cannabis products legal.

Adding to the uncertainty for licensed producers and packaging companies is the Oct. 21 federal election, which could unwind the entire process if a new government is elected.