Can you bottle good karma? 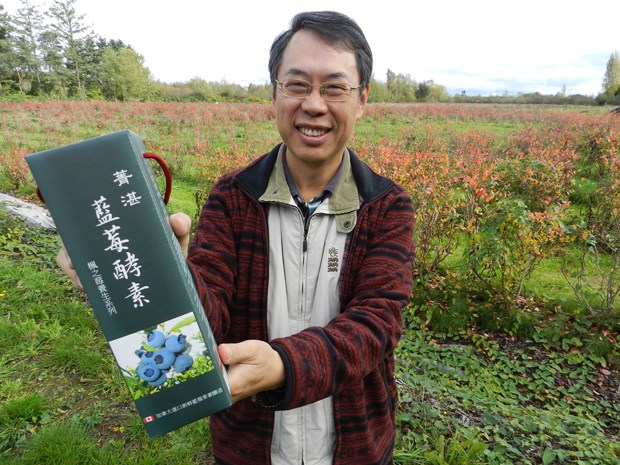 Fred Liu has been busy finding new markets in China for organically grown blueberries from Richmond, which are sold both as fresh in season, and frozen for processing into a high-priced health drink. Photo by Philip Raphael/Richmond News

Ensuring good karma can be a powerful, motivational force.

That’s why when his wife, Jeri, volunteered her time to her Buddhist temple group to help harvest a crop of blueberries at a Maple Ridge farm a few years back, he discovered a pathway to establishing an organic blueberry exporting business to Taiwan and other parts of Asia.

“I wanted to return something good to the world. And with our business, I hope to be able to do that in a small way,” said Fred, who established Lohas Farm Inc. in 2006 by leasing acreage to grow organic blueberries. The Lius started with fresh exports, then added frozen blueberries that are turned into an enzyme-laden health drink that Taiwanese customers are scooping off the shelves in short order.

“We are all sold out,” Fred told the Newsthis week. “We have always been sold out — both the fresh and frozen crops.”

He says it’s a bit of a surprise given farming is not his skill set.

“I’m an IT guy. I didn’t know anything about farming until I came here to Canada,” Fred said with a smile. But one thing he did know was a belief system based on positive energy that helped spawn a business proud of its all organic status.

Just like when Jeri, and others in her temple group, returned earthworms to the farmland where they picked blueberries, Fred is hoping his Blueberries Essentials drink will spread improved health and good karma to customers.

“Everything helps the blueberries grow — the insects, the mice, the birds and the worms. And if I used a spray that would kill all of that, that’s not the Buddhist way. We believe in more than one life. And in our lives, everything is sacred.”

Working on the premise that blueberries — especially those grown on good, clean Canadian soil — are prized by Asian markets, the couple set about to farm a few acres in Richmond and managed to export roughly 120 pounds of fresh product, mainly to friends and associates.

That ballooned to 3,000 pounds in year two, and double that the following season.

“People in Taiwan like Vancouver blueberries,” Fred said. “(They’re) much better than those grown in Australia or other parts of North America, or even Japan.”

Aiding the entry into the Taiwanese market was a deal to sell through Leezen, a chain of around 110 health food stores that then prompted the development of a blueberry enzyme drink, a product that has come into vogue in Asia.

“When I heard about how much people wanted enzyme drinks in the Taiwanese and Chinese markets, I decided to explore that,” Fred said. “People are very health conscious there and believe blueberries, with their richness in antioxidants, can help things like eyesight.

“We know that markets in China, especially, are wanting the organic products because that country does not have a very good record when it comes to food safety,” added Jeri. “Canada is seen as a very clean country with strict regulations when it comes to food production. That’s why we have a Canadian flag on our products even though the production process for our blueberry drink is all done in Taiwan.”

About half of the exported berries — about 10,000 pounds of frozen fruit — is earmarked for the enzyme drink, while the remaining 10,000 pounds, grown on 10 acres of leased farmland in Richmond, is sold as fresh fruit.

Enzymes act as catalysts for human cells to function. And the body‘s ability to digest, absorb and utilize nutrients depends on the presence of enzymes.

Boosting the enzyme levels in fruit such as blueberries, through fermentation, is believed to be a great benefit, especially in diets heavily laden with enzyme-depleted, processed foods.

Fermentation of Liu’s frozen blueberry crop — which is supplemented by fruit from organic farms in Abbotsford and Maple Ridge — takes about eight months. But the wait is worth it, as the cost of production allows the drink to be priced competitively in Asia.

Fred said a 375 ml bottle he produces sells for around $133 in Taiwan while another brand that uses Japanese-grown blueberries costs close to $400.

That pretty sizeable gulf in retail prices has the Lius thinking about branching out into other organic fruit crops, namely cranberries and raspberries.

Still, they are busy making sure the two farm sites they manage are productive to fill demand that in 2013 saw sales of 6,000 blueberry enzyme drink bottles.

Projections for the blueberry crop picked in 2014 call for production of around 12,000 bottles.

“That’s probably going to be sold out, as well,” Fred said. “And we haven’t yet tapped into the Chinese market. That, and possibly the U.S. market, is where we might go. We’re getting lots of calls. People are very interested in what we have.

“But right now, I am busy with the farming, making sure we do things right here. Because, as Buddhists, we believe in multiple lives,” Fred said. “And if we do good here, we can in another life, too.”

Fred Liu has been busy finding new markets in China for organically grown blueberries from Richmond, which are sold both as fresh in season, and frozen for processing into a high-priced health drink. Photo by Philip Raphael/Richmond News