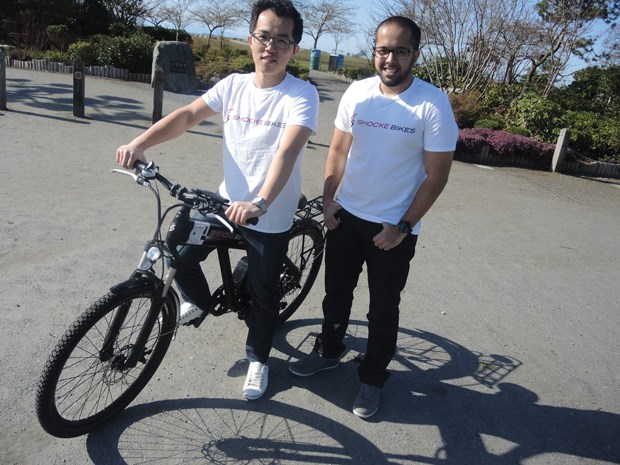 Steven Lo (left) and Hussein Jafferjee, two of the six partners in Shocke Bikes, display their electrically assisted bicycle called Spark which has a range of 30 km if just the motor is used. Photo by Philip Raphael/Richmond News

A group of six, local 20-somethings are hoping their business idea for an electrically-assisted bicycle will energize the Lower Mainland’s growing cycling community — oh, and help save the global environment, as well.

“As a group of friends, we met in 2012 in university and thought why don’t we get together and try to do something,” said Hussein Jafferjee, adding they considered a few ideas before choosing one that was really close to home.

“Actually, it was inspired by my dad who was pretty active riding bikes, but because of his age (62) and physical limitations wasn’t able to get into Vancouver from Richmond because of the steep bridges and roads,” Jafferjee said.

So, the group formed Shocke Bikes and began researching products that could tap into not only the commuter and recreational cycling communities, but the segment of the bike riding population who would be enticed onto the roads if the physical task was made just that bit easier.

What they came up with was a design for a mountain bike with a battery powering a 350 Watt, high-speed motor driving the rear wheel. And in 2013 they began sourcing potential suppliers in China that could offer the quality of materials and components they were looking for.

“This is definitely not an off the shelf bike,” Jafferjee said. “No one has put theses types of components together on one bike.”

To look at, the Spark, as it’s called, looks pretty much like any other mountain bike. It’s main difference is a wide centre frame bar that houses the high-energy density, lithium-ion battery.

Even the rear wheel hub is quite normal looking, hiding the electric motor that offers pedal assistance with the push of a throttle switch, leaving it up to the rider when they require help.

Range for the Spark depends on how much assistance is required. By battery alone, a rider can cover 30 km — more than enough for short distance commutes which can also be more efficient than other forms of transit.

“We found out from studies that if you work within eight kilometres from your home, it can actually be faster to use a bike than a car or transit,” Lo said. “And with an electric bike, that commute can be even that much faster.”

The battery pack takes four to six hours to recharge and is good for about 1,000 recharge cycles.

Shocke Bikes has also incorporated some high-tech gear into the Spark. Part of that are wireless turn signals, and a special set of laser lights that illuminate a line designating a bike lane-sized space on either side of the rider.

“Reflectors on a bike are good because they tell you where the rider is,” Jafferjee said. “But what these lights do is draw out a path behind you to show how wide an area the bike and rider need.”

Right now, the only way to get on a list for a Spark — which sells for $999 U.S. — is to subscribe through the company’s crowdfunding (Kickstarter) program which has managed to exceed its goal of $40,000 with under two weeks to go in the fundraising campaign which ends March 22. Sales will then be done online at shockebikes.com.