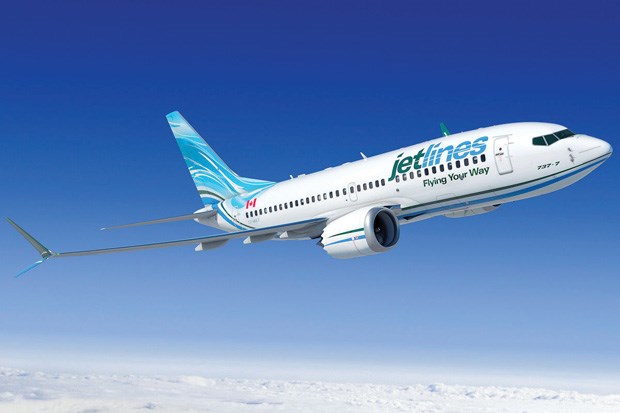 Jetlines plans to use a single aircraft type ­— Boeing’s 737 — when it launches service this summer from YVR.

A group including some seasoned, Canadian airline executives are hoping rock bottom airfares offered by a new, YVR-based carrier will help stem the flow of air travellers catching flights south of the border.

David Solloway, who spent four decades with the likes of Canadian Pacific Airlines, Canadian Airlines and United Airlines is part of the team — which includes former Canadian Airlines International executive Sid Fattedad — getting Jetlines clear and ready for takeoff this summer as the country’s first Ultra Low Cost Carrier (ULCC).

Solloway, Jetlines’ president, chief commercial officer and director, said the business plan is to run the operation very much in the same way Easyjet, Allegiant Air and Ryanair do, where passengers pay a low price for their seat, and then add on fees for other services, such as baggage and seat assignments.

“The model, of buying a ‘seat and a seatbelt’ and only paying for goods and services each passenger may choose individually, is known all over the world and is the fastest growing segment in the airline industry,” he said recently in an email interview from Toronto.

Trouble is, a lot of that passenger growth, when it came to Canadian travellers, meant traffic streaming across the border to airports.

“According to the Canadian Airports Council, in 2012 almost five million Canadians travelled to the USA to take advantage of ultra low airfares,” Solloway said.

At Bellingham International Airport — a 72 km drive south of Richmond — Canadians made up 67 per cent of air traffic on ultra low cost carrier Allegiant Airlines in 2013, as they headed for destinations such as Las Vegas, Hawaii and Arizona.

By initially offering flights across western Canada, then sun-spot destinations in the U.S. and Mexico, Solloway said Jetlines is hoping to offer not only competitive prices, but the convenience of travelling through YVR on one of its 148-seat Boeing 737-300 aircraft it plans to begin operating this summer.

Plans are to have a single aircraft type fleet of 16 Boeing aircraft in about 36 months after start-up. Plus Jetlines made an announcement recently with Boeing to order up to 21, 737-Max aircraft for deliveries starting in 2021.

In terms of a boost to the local economy, having a new airline based at YVR means more local jobs.

Jetlines anticipates hiring 65 employees for each aircraft it flies out of the main terminal.

“Most counties around the world support Ultra Low Airfares and Canada is one of the few countries which does not have a home-based low airfare airline alternative,” Solloway said.

It’s a $50 million investment Solloway and his fellow Jetlines executives and investors hope will pay off big time.

Marketing expert and SFU professor Lindsay Meredith said it’s a business idea that has a good chance of taking off, likely without the need of having to undercut those low-cost carriers south of the line to attract attention.

The big selling point will be a simple one — convenience.

“This is not moonshot stuff,” Meredith said. “Nobody wants to go through that border hassle. Nobody wants to put those extra miles on a car, or stay overnight in a hotel so they can jump on the next flight in the morning.

“So, in a case like this, you don’t even have to match their prices, you just have to get in the ballpark.”

Holloway said Jetlines is planning to be 30 to 40 per cent lower than the current lowest airfares in the Canadian market.