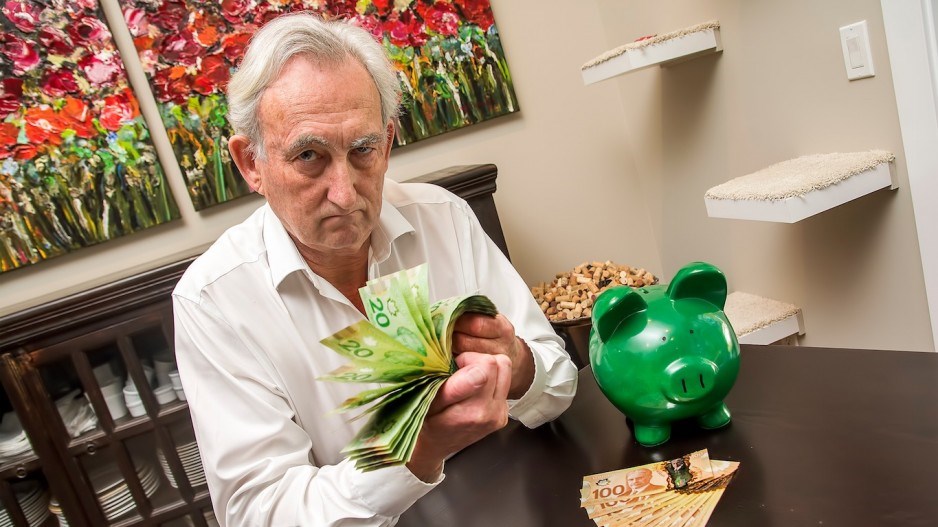 Phytron Technologies Inc. CEO Bob Potter, exasperated at not being able to get a business bank account for his legal cannabis company, wonders if he will have to keep money in a shoebox. Photo: Chung Chow

It is more than four months since Canada legalized recreational cannabis but entrepreneurs acting within the law in that sector continue to face hurdles and discrimination when looking for a financial institution.

“It’s very frustrating,” said aspiring cannabis-sector entrepreneur and Phytron Technologies Inc. CEO Bob Potter. “How can companies attract outside money if they can’t deposit it in a secure financial institution? Do they keep the cash in a shoebox under the bed?”

Potter plans to become a licensed cannabis grower, and he is developing software aimed at optimizing growing conditions inside cannabis grow rooms.

Canada’s big banks all turned Potter down when he asked them if he could open a business account. So did major credit unions.

None of the institutions would explain to Business in Vancouver why they do not yet treat legal cannabis businesses like startup bakeries or restaurants.

Representatives at the Royal Bank of Canada and Toronto-Dominion Bank told BIV in separate emailed statements that their institutions’ policies are evolving, and that they assess whether to accept cannabis-sector businesses as clients on a case-by-case basis.

Bank of Montreal and Canadian Imperial Bank of Commerce made headlines earlier this year for combining to provide an $80 million loan to a venture part-owned by licensed cannabis producer Canopy Growth Corp.

Owners of small cannabis enterprises, however, continue to get turned away if they simply ask for a business bank account.

Acquaintances suggested to Potter that he ask representatives at the CCEC Credit Union if he could open an account. Staff there told him that it would cost him $495 per month in fees, and that he would be restricted to conducting transactions that did not exceed $3,000 per day, $10,000 per week and $20,000 per month – denominations that he considered too restrictive, particularly given that he would be paying what he considers an exorbitant monthly fee.

The day that the store became legal, Babins found a different credit union, which was willing to accept him on a trial basis in exchange for a $500-per-month fee for the first two months. Babins is hoping that after the two months is up, he will be able to renegotiate with that institution to either eliminate or substantially reduce that fee.

Babins would not name his current credit union, although he said it is not one of the province’s two largest credit unions: Vancouver City Savings Credit Union (Vancity) and Coast Capital Savings Federal Credit Union.

Vancity told BIV in an email that it was “taking a closer look at [the cannabis] industry,” and that its policy on opening business accounts for small cannabis-sector entrepreneurs was something that it is “not able to discuss in detail at this time.”

Staff at the credit union where Babins now banks told him not to disclose the institution’s identity unless it is to someone who has been approved for a provincial licence to sell cannabis, he told BIV.

When Babins operated a cannabis dispensary before Canada legalized recreational cannabis sales, he banked at a variety of institutions, and used holding companies. Once a financial institution caught wind that his holding company owned an illegal dispensary, it would close the account, he said.

“We had to change bank accounts quite often,” he said. “We’d get one [account] open, and they would catch us and close it. I went to all our old reps and said, ‘Now we’re licensed. Would you give us our account back?’ They said, ‘No.’”

A peripheral banking issue that irks Babins is that debit-card processing companies charge legal cannabis retailers substantially more than they charge other retailers.

Babins passes on to customers the $1-per-transaction fee that his processor, Toronto-based POSconnect, charges for debit-card transactions. Were he to use the global giant Moneris, he said, his total cost would be much higher than $1 per transaction.

He estimated that the processing cost per transaction at a startup bakery would be about $0.08, so he believes that the cannabis retail sector is unfairly discriminated against.

Some established licensed cannabis producers have built trust and have been grandfathered by financial institutions.

Tantalus Labs, for example, has business bank accounts at Bank of Montreal and Vancity, said CEO Dan Sutton, whose company operated in the medical marijuana sector before recreational cannabis was legalized.

Sutton is happy with his current financial-institution relationships but he has lingering bitter memories with one of Canada’s big banks.

In mid-2017, that institution abruptly cancelled his account, he said.

Sutton found out that his account was suspended when he had trouble accessing his account via the internet.

“That’s how they terminated our relationship,” he said. “I almost missed payments to contractors because of the scramble to get new accounts and move the assets over.”