Worried about being criticized for not narrowing down your academic focus in order to, hopefully, set you on the pathway to a happy and successful career? R.C. Palmer grad (2007) Lawrence Le Lam didn’t.
Feb 23, 2017 3:26 PM By: Philip Raphael 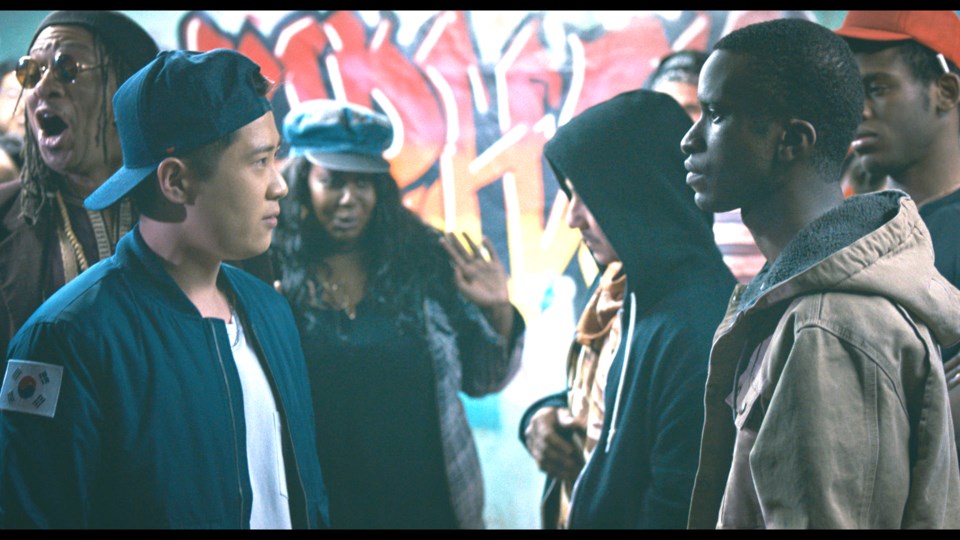 Racial tensions and the role of underground hip-hop music is the subject of the recently filmed, short movie Cypher, which makes its debut at the Crazy8s Gala on Saturday. Photo submitted

Worried about being criticized for not narrowing down your academic focus in order to, hopefully, set you on the pathway to a happy and successful career?

R.C. Palmer grad (2007) Lawrence Le Lam didn’t. And now he’s using his experience from embracing numerous disciplines to help tell stories on video and film, most recently as one of the winners in the annual Crazy8s film contest.

“I was always a bit of a dabbler,” Le Lam said. “In high school, I was the artistic type. I was in theatre, but also painted on shoes, made custom designed shirts and did some digital design and illustration. And later in college, I jumped to business, marketing and graphic design that eventually led me to Emily Carr (University of Art and Design).”

It was his intention to further pursue graphic design, but Le Lam was intrigued by a video/film production course at the renowned school on Granville Island.

“I felt like everything I had done previously — the drama, business, marketing and graphic design — led to this magical new thing to try out,” Le Lam said.

The result was a number of short films and the recent chance to be one of six groups chosen from hundreds to receive funding and support from the local film industry for emerging filmmakers to conduct three days of shooting and five days of post-production in the Crazy8s challenge.

Le Lam directed the 10-minute film — co-written with Jerome Yoo and Nach Dudsdeemaytha — called Cypher, which was shot in and around Burnaby and Vancouver during the past week. It delves into the simmering racial tensions of 1990s Los Angeles and the emergence of the Korean-American hip-hop scene.

Le Lam said it’s somewhat like an homage to director Spike Lee’s 1989 film Do the Right Thing, which examined the racial conflicts that bubble to the surface during the hottest day of the year in a cramped, Brooklyn neighbourhood.

“Cypher takes place after the big 1992 Rodney King riots when a young, timid, high school student gets drawn to the L.A.’s underground hip-hop scene where he finds a platform to confront his painful past,” Le Lam said.

King was an African American taxi driver who became internationally known after a video was made public of him being beaten by Los Angeles Police Department officers following a high-speed car chase.

The shooting of Latasha Harlins, a 15-year-old African-American, by a Korean-American liquor storeowner, at about the same time also escalated racial unrest.

“Those events created a lot of animosity between the black and Korean communities,” Le Lam said. “And we found the conflict very interesting because of Korean rapper Tiger JK’s efforts to create dialogue on the situation through his music. And while our story is not based on his life, it’s loosely inspired by it.

“The film celebrates hip-hop’s ability to transcend boundaries and bring people together in unique ways.”

With the film shot and editing done, Cypher will be among the six being screened this Saturday at the Crazy8s Gala Screening event.

Once the films have been shown, Le Lam is hoping to shop it around the film festival circuit and feels fortunate to have been given the opportunity to make it.

“It’s a great little bootcamp/opportunity to see what we can do within the parameters of the contest.”