Column: The importance of being amused

While school children roam free, adults work hard, figuring out how to keep the kids amused. Not that it’s difficult to find amusements, quite the opposite.
Jul 22, 2018 10:10 PM By: Sabine Eiche 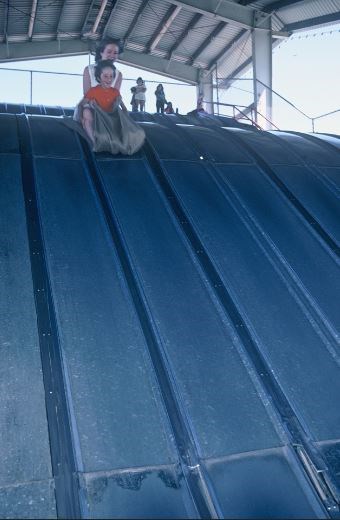 While school children roam free, adults work hard, figuring out how to keep the kids amused. Not that it’s difficult to find amusements, quite the opposite. But there’s so much offered now, and the careful parent has to research, vet, and Google everything. Moreover, come summer, the Mom-and-Pop taxi service runs overtime.

Things were simpler with fewer choices. Decades ago, it didn’t take much to amuse us. We’d head for the local park, to lie on the grass near the wading pool and give free rein to our imagination.

From 1969 until 1973, Richmond boasted an attraction providing endless amusement for kids from far and wide – the Skookum Slide, erected at Richmond Centre. Stairs, 30 feet high, led to the top of the slide, where you bought a ticket (three rides for 25 cents) and picked up a burlap sack. No video game of today could match the excitement of flying down 190 feet on your magic burlap carpet.

Let’s peer through the time tunnel to see how people amused themselves long ago. How about Shakespeare? Was he ever amused? If so, he was deceived. I’ll explain. When Shakespeare died, in 1616, amuse (from Old French “amuser,” to distract, hoax) signified delude or deceive. Around 1630, the meaning, deceive, was tweaked slightly to signify entertain, which became the principal sense of amuse by the 19th century.

Long ago, people kept amused by playing games, deceiving time as they wiled away the hours. The vocabulary of gaming now peppers our language.

Card games, known to have been played in China in the 9th century and in Europe by the 15th, gave us such terms as discard and shuffle, as well as the phrases “to follow suit” and “to play ones cards right.”

Thousands of years before Christ, people already threw dice. Our word hazard, meaning risk, was the name of a 14th century dice game. Dicey is a 1940s synonym for risky.
Backgammon was played over 5,000 years ago in Persia. The phrase to turn the tables comes from the board game, originally called tables in English.

The birthplace of chess is believed to be India, where it was first played almost 1500 years ago. Our words gambit, checkmate and stalemate all come from chess.

A form of dominoes was known in 13th century China, but the modern version of the game is traced to 18th century Italy.

Dominoes and I have crossed paths only once. In 2012, I went to Chrysler at the Richmond Auto Mall for a maintenance check. The next day, the car’s “check engine” light came on. Back to the Auto Mall, where they reset the computer, charging me $136.64. A couple of days later the “check engine” light reappeared. Back to the Auto Mall, where they replaced the cooling fan module, for $769.22. At the same time, they managed to short the TIPM module – the replacement cost $1,134.56. “It’s the domino effect,” a sales representative explained. I was not amused.