All the talk about the Agricultural Land Reserve and Richmond developers having been permitted to double (in one case, quadruple) the maximum house size laid down in provincial guidelines and even add an additional dwelling, thereby allowing land int
May 26, 2018 1:29 PM By: Sabine Eiche 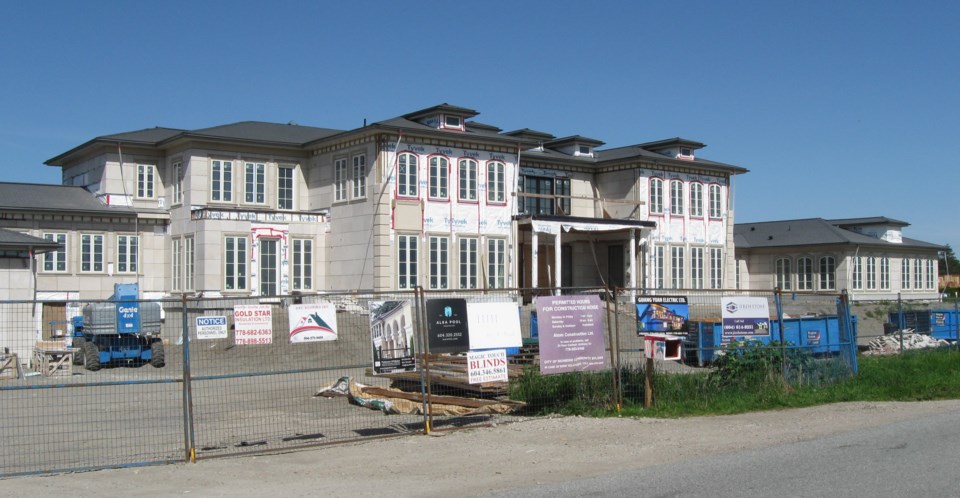 Mega-mansion on No. 4 Road and Steveston Highway. Photo: S. Eiche

All the talk about the Agricultural Land Reserve and Richmond developers having been permitted to double (in one case, quadruple) the maximum house size laid down in provincial guidelines and even add an additional dwelling, thereby allowing land intended for growing food to be gobbled up by luxurious mega-mansions, has made the word corruption flash through my mind. But let me be clear – I’m not accusing anyone in particular of corruption. It’s just that the situation made me think of Marcellus’s line in Shakespeare’s Hamlet, Act I, Scene IV: “Something is rotten in the state of Denmark.”

Corruption is a good word to focus on in this column because I want to illustrate the handiness of prefixes. A prefix is a little word, such as “pre” in prefix, which comes from the Latin “prae,” meaning before. You attach a prefix to the beginning of another word to change or qualify its meaning. By using prefixes you can turn your base word into many different ones.

In corruption, the base word comes from “rupt-,” the past participle stem of the Latin verb “rumpere,” to rupture, break. The prefix “com” signifies together, altogether, with. “Corrumpere” in Latin means to destroy, spoil. Our verb corrupt dates from the Middle English period, and its meanings include contaminate, seduce, bribe. It was also used with the sense of putrefy to refer to food, such as meat, or medlars, a fruit that tastes better corrupted.

Two verbs that are easily confused (there’s that “con” prefix again) are erupt and irrupt. Erupt (with the prefix “ex”) comes from the Latin verb “erumpere,” to break out or burst. Diseases erupt, as do volcanoes. Also teeth erupt, through the gums. Irrupt, which uses the prefix “in,” meaning into, upon, in, on, signifies to break or burst in, to invade. When referring to plants or animals, irrupt means to increase suddenly in great numbers. There is an irruption of sweet clover in my herb garden this year.

The prefix story continues. We have elections for mayor, councillors and school trustees coming up in October. The Latin “legere,” to choose, is at the root of the English words elect and select, formed by attaching the prefixes “ex” (meaning out) or “se” (meaning apart). Over the next months we’ll hear the election candidates explain their promises. Explain comes from the Latin “planus” (flat), with the prefix “ex”; in modern Italian the verb to explain is “spiegare,” which literally means to unfold, or (as Latin would have it) to lay out flat. Promises are something that politicians give freely while campaigning. The source of promise is the Latin “mittere” (to release) and the prefix “pro” (before). But let’s not forget that these promises – released before the election – are so often blown away by the winds of bureaucracy once the candidate is in office.

Now back to what got me started on prefixes – corruption and the abuse (note that prefix “ab,” meaning off, away from) of farmland in Richmond. On Mother’s Day, I went to Steveston Highway and No. 4 Road to photograph the mansion (as big as a shopping mall) that’s under construction on farmland. I asked myself why the community of Delta, our neighbour on the other side of the Fraser River, doesn’t have Richmond’s problems of excessively large houses on farmland. Can Richmond’s farmers legitimately claim to have needs that are so different from those of Delta’s farmers?

Corruption grows slowly but steadily. Stamping out corruption slowly, however, is rarely effective. What is effective is to go cold turkey – to interrupt corruption abruptly. That’s one positive change an election could bring about, as long as we select the right candidates.