Column: Crows are no pigs

Mrs. Crow has been dropping in to eat and freshen up at my place for over a year, giving me lots of time to observe her and to learn about her habits.
Jun 9, 2018 1:01 PM By: Sabine Eiche 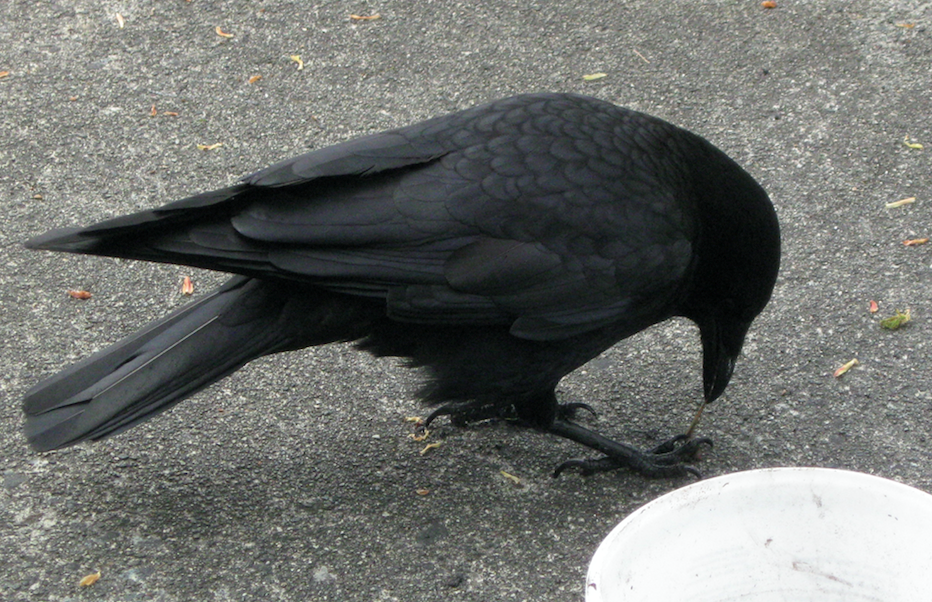 Mrs. Crow has been dropping in to eat and freshen up at my place for over a year, giving me lots of time to observe her and to learn about her habits. Initially, I behaved like a zealous hostess, showering the guest with an embarrassment of riches, and this, I discovered, had undesirable consequences.

(Since I’m certain Mrs. Crow isn’t going to read this column, let me sideline her for a second to explain a couple of things in that last sentence. The Greek word “zelos,” meaning ardor, emulation, is the source for the words zealous and zeal, and also jealous; an embarrassment of riches is an idiomatic phrase signifying an overabundance of something or too much of a good thing – it originated with John Ozell’s 1738 English translation of the French play, “L’Embarras des richesses,” 1726, by Léonor Jean Christine Soulas d’Allainval).

On the menu for Mrs. Crow are not only peanuts but all kinds of delicious (disgusting, to me) creatures that I encounter in the garden. Every time I dig in the soil, a cutworm or two wriggles out. After an hour I have a glut of them, which I store in a container (glut comes from the Latin “glutire,” to swallow; glutton and gullet are related words). I also uncover a lot of chafer beetle larvae – Mrs. Crow’s favourite appetizer.

The first time I served cutworms, I dumped several dozen on the driveway and watched as Mrs. Crow, foot firmly planted on a squirming worm, pulled at it with her beak. After eating about a dozen, she picked one up and headed for the lawn. To my horror, she started to bury the cutworm in the grass! I quickly scooped up the remaining worms before she had a chance to repopulate the garden with the vermin I’d evicted.

Mrs. Crow’s behaviour was interesting all the same – she would regulate herself, eating only as much as she needed and stashing away surplus food for future consumption. Unlike humans, she did not binge eat. (Binge was originally a dialect verb to refer to the process of soaking a wooden vessel in water to make the wood swell and become water-tight. Early in the 20th century it was used to refer to excessive drinking and eating).

Sometimes, though, I question Mrs. Crow’s strategy. Once I observed her take a nut and go to the lawn. poke her beak into the grass and then pick up a large leaf to cover the spot where she’d been poking. When she left, I went to look – just as I suspected, there was the nut, cradled in the grass, lightly blanketed by the leaf. It left me scratching my head – has Mrs. Crow never heard of the sniffer squirrel?

In the spring, when she has hatchlings to feed, her food intake is much greater than during other times of the year. She’ll continue to provide her offpsring with meals even after they’ve fledged (the young bird is said to have fledged when it has developed its wing feathers and can fly). Crows don’t have crops, where they can store food, so Mrs. Crow packs as much as possible into her beak before taking off for the nest. Once I kept count of the peanut halves I tossed to her, curious to know what her limit was – she stopped at 14. Each time she picked up another half, the peanuts already in her beak would be shuffled around. The whole arrangement reminded me of tightly packed peas in a pod. I’ve also seen her unload what’s in her beak in order to add items of a different shape and texture, for example when she’s got chafer beetle larvae in addition to peanuts to take home to her babies. She packs scientifically and expertly.

Mrs. Crow has excellent manners when she eats. The beak is her multi-purpose utensil and she cleans it often. After she’s hacked away at peanuts there’s liable to be the odd crumb or two sticking to her beak, which she then rubs to and fro either in the grass or on something hard, such as the planter or bird bath. The technical term for this behaviour is feaking.

Well, even if some of the things she eats revolt me, I’m full of admiration for Mrs. Crow’s comportment because, unlike humans, she never pigs out and she never makes a pig of herself.