We’ve all experienced them – blessings in disguise. That is, a stroke of bad luck that turns out to be good luck after all. Sometimes, though, the blessings are so well disguised that we don’t realise they’ve happened.
Aug 18, 2018 1:02 PM By: Sabine Eiche 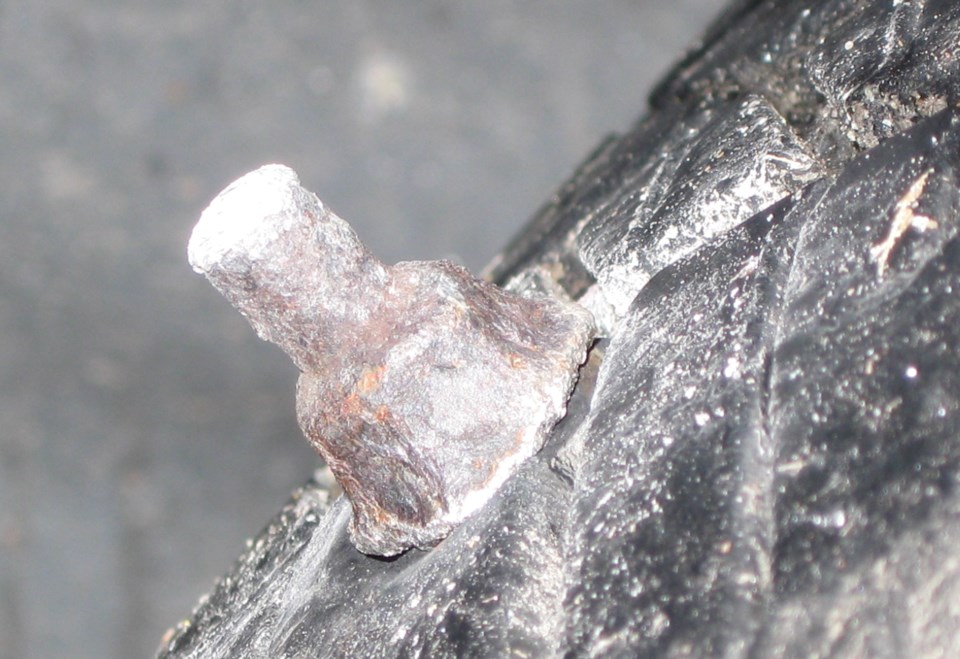 This nail led to more than a flat tire. Photo: Sabine Eiche

We’ve all experienced them – blessings in disguise. That is, a stroke of bad luck that turns out to be good luck after all. Sometimes, though, the blessings are so well disguised that we don’t realise they’ve happened. It’s not known when the phrase was coined, or by whom – it first appeared in print in the clergyman James Hervey’s Hymn 615, published about 1746.

I’ve had lots of blessings in disguise, one of them life-changing. Another, six years ago, solved a stressful problem. My most recent blessing in disguise led to a joyful adjustment in my daily routine.

During winter semester of first year at UBC, my attitude to the courses I’d enrolled in was cavalier. I didn’t even bother going to the library. Then I performed badly on a test in Fine Arts 125, which made me sit up and buckle down. I completed a BA and MA in art history and won a Canada Council arts bursary to study the restoration of paintings in Florence. After that, Princeton admitted me to their PhD program, and once I’d done the course work I left for Florence to write my doctoral dissertation on an Italian topic. I figured I’d be there two years. It turned out to be 32. They were unforgettable years. I literally grew up in Italy, learning things I’d never have learned staying here, not just about art but about people, traditions, food – in short, about life. That near failure at UBC was probably my biggest blessing in disguise.

In December 2012, going south on Russ Baker Way, I turned left to cross the Dinsmore Bridge. The moment I was through the intersection the car began making an alarming sound, as if a huge rock had lodged in the tire. Once home, I found that what I’d picked up was not a rock, but a huge nail. I went to a nearby tire store, which turned out to offer all automotive services. A big weight dropped from my shoulders. After the costly domino-effect debacle at Chrysler months earlier, I’d vowed to never return to the Auto Mall. My flat tire made it possible for me to connect with an efficient, honest auto repair shop, within walking distance from home.

For years my daily routine was to read emails and online news while drinking my pre-dawn coffee. One day in August 2017, my modem died. Shaw said I’d have to wait a week for a technician. I felt like an addict forced to go cold turkey. The first day without my early morning internet fix was hard. I sat on the deck drinking coffee, anxiously waiting to get to a library computer. By day three, I was looking forward to that wake-up coffee undisturbed by the internet. Since then, I’ve not missed a single morning out on the deck, regardless of the weather or temperature. The hour before dawn is a magical, mysterious time. Nature awakens, and I’m awake watching and hearing it happen. Nothing online can match that.