A glimpse inside the refrigerator in 1957. Photo: © K.E. Eiche We’re in an era of excess, a word that comes from “excessus,” which to an ancient Roman meant something that went beyond the bounds of reason.
Jun 22, 2019 1:00 PM By: Sabine Eiche 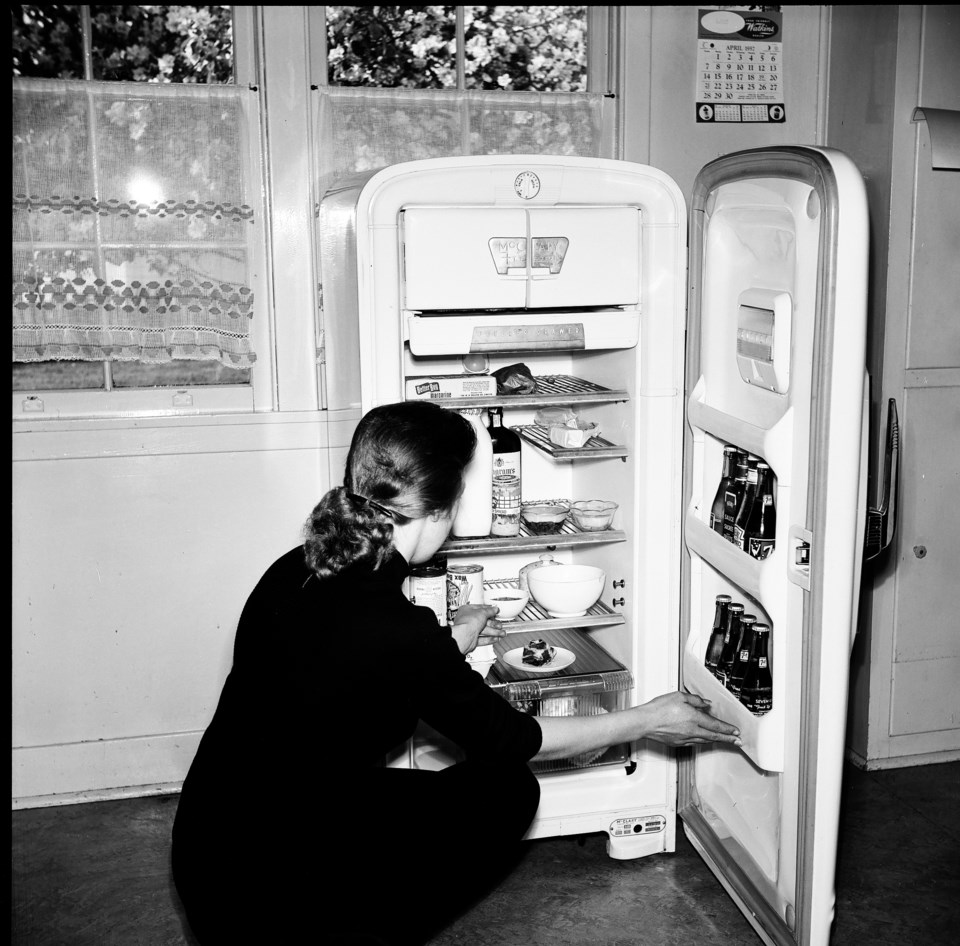 We’re in an era of excess, a word that comes from “excessus,” which to an ancient Roman meant something that went beyond the bounds of reason. There’s excess everywhere – excessive plastic and excessive waste are getting lots attention these days. Shouldn’t we try harder to be guided by what we, the people, need and not by Big Business, whose only need is profit?

For years the media have been providing statistics about the quantity of food thrown out worldwide – in 2015 it was 1.3 billion tonnes. Recently, I heard on the radio that 60 per cent of our food ends up in the landfill. The same programme mentioned two initiatives, Second Harvest https://secondharvest.ca/ and Food Rescue https://www.foodrescue.ca/ , who help businesses and farms get surplus food to charities and non-profits. But individually, we “throw away $1,766 worth of food a year,” according to Food Rescue.

It wasn’t always like that. Do you remember what our food consumption was like decades ago? I got the chance to turn back the clock and sneak a peek inside our fridge when I found a photograph of my mother holding open the fridge door. A wall calendar provides the date – April 1957. We’d been in Canada for six months, living on Douglas Crescent in Burkeville.

I was struck by how relatively empty it looked. Food wasn’t crammed in, as is usual today. The quantity of food in the fridge was sufficient for a small family for two or three days. We didn’t have a car, but Tom-Boy was nearby. My mother planned ahead and shopped carefully – no overloading when you’re on foot.

In the fridge, margarine and something wrapped in paper (meat?) lie on the top shelf. The second shelf holds a bottle of milk, a jar of Sandwich Spread, two desserts in glass bowls and the makings of a cold supper – margarine, cheese and (probably) liverwurst. A bottle of whiskey stands behind the milk – my parents must have been expecting guests. Cans of Campbell soup, Pacific milk and wax beans are on the shelf below, with butter in the covered dish and something  in a bowl and a cup. The bottom shelf has a carton of eggs and what might be cake on a saucer. No cling wrap in sight. Vegetables are in the crisper and more bottles stand inside the door – Heinz ketchup, another Heinz sauce, and six bottles of Seven-up.

Why waste food? Leftovers need only seasoning and imagination to revive. Turn them into that tasty Latvian specialty, “Komm morgen wieder” (German meaning “Come back tomorrow”). At the centre of a thin French pancake, place a spoonful of well-seasoned and blended leftovers, fold the pancake into a rectangle, pan fry on both sides (can be frozen, fry after thawing). Leftovers can be put into a soup too (stale bread, leftover beans and cabbage are the main ingredients of the classic Tuscan ribollita, literally re-boiled).

Well, if purging our planet of plastics requires determination and ingenuity, fighting food waste is, by comparison, a cakewalk.