Richmond bakery rises to the occasion to help local charities

The Cobs in Blundell Centre runs a number of programs to help give back to the community
Feb 20, 2021 9:15 AM By: Kirsten Clarke 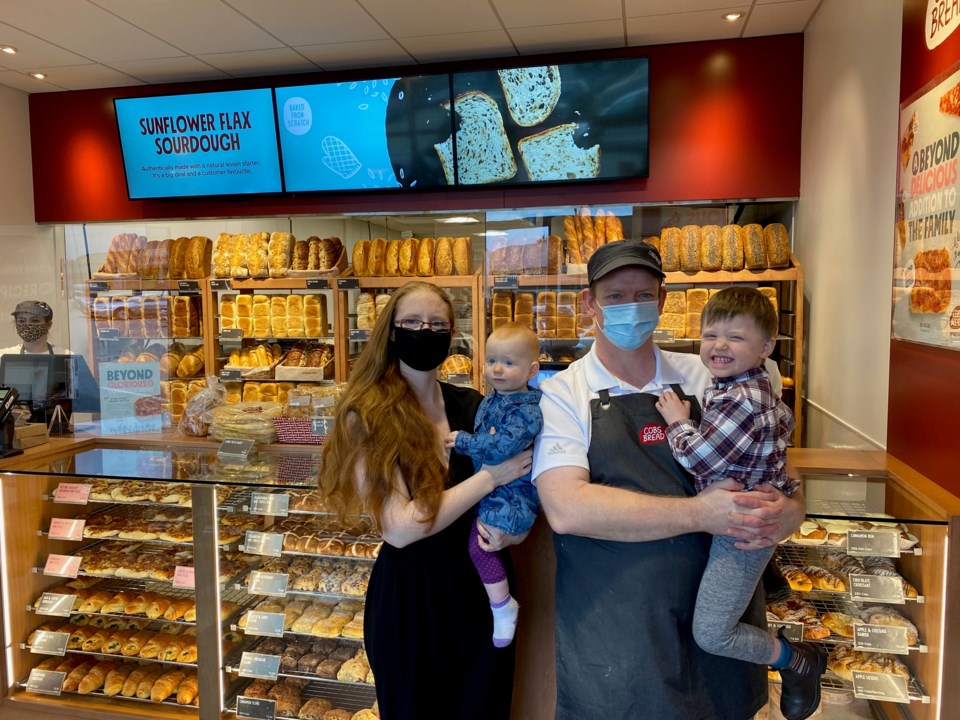 Andrew Gunn and his wife Melissa, and their two children, Violet and Jackson. Gunn and his team at the Blundell location regularly give back to the Richmond community.Photo courtesy Andrew Gunn

At the end of each day, Cobs Bread Bakery in Blundell Centre donates whatever baked goods it isn’t able to sell.

And according to Andrew Gunn, a Richmond resident who, along with his wife Melissa, owns the Blundell location, those end-of-day giveaways amount to a weekly retail value of around $10,000.

“Currently at Blundell, we have a list of eight charities that we donate to on a weekly basis,” said Gunn, who purchased the Richmond bakery in July and also runs the Cobs on Main Street in Vancouver.

“We normally have it set up so that at the end of every day, one charity will come and collect all of the leftover product from that day and they’ll distribute it to people through their channels.”

Some of those organizations – which were partnered with the Blundell location prior to Gunn taking over – include Richmond House Salvation Army and St. Albans outreach, said Gunn, as well as churches around the city.

Gunn, who met his wife in what’s now their Richmond Cobs, said that it was important to be able to give back to the community in a time when so many are struggling from the effects of the COVID-19 pandemic.

“The more we – as in the population here in the Lower Mainland – can do to help other people out, the faster we’re going to get through it, but more importantly, the easier the recovery once we are through it,” he said.

“So if we can help out and make it a little easier for as many families as we can in the community, then, we’re absolutely all for it.”

The bakery also runs a fundraising program with about 10 local schools, which Gunn says operates at both his Richmond and Vancouver locations.

However, the Blundell program is running “a much bigger program” than Vancouver, he said. When parents come in to purchase their bread or treats, they are able to collect “points” that are then given back to PACs as a rebate at the end of the year.

The shop is also hoping to expand its programs this year.

“We’re always on the lookout for other charity groups that could benefit from our end-of-day program,” said Gunn.

“One area that we do want to focus on in the coming year is some breakfast programs through local Richmond schools for kids who don’t have enough time or resources to have breakfast at home.”

There’s also plans to hold donation days, such as on March 27 when the shop will donate $2 from the sale of every six-pack of hot cross buns to Richmond organization the Giving Truck, which prepares meals and kits for the homeless.