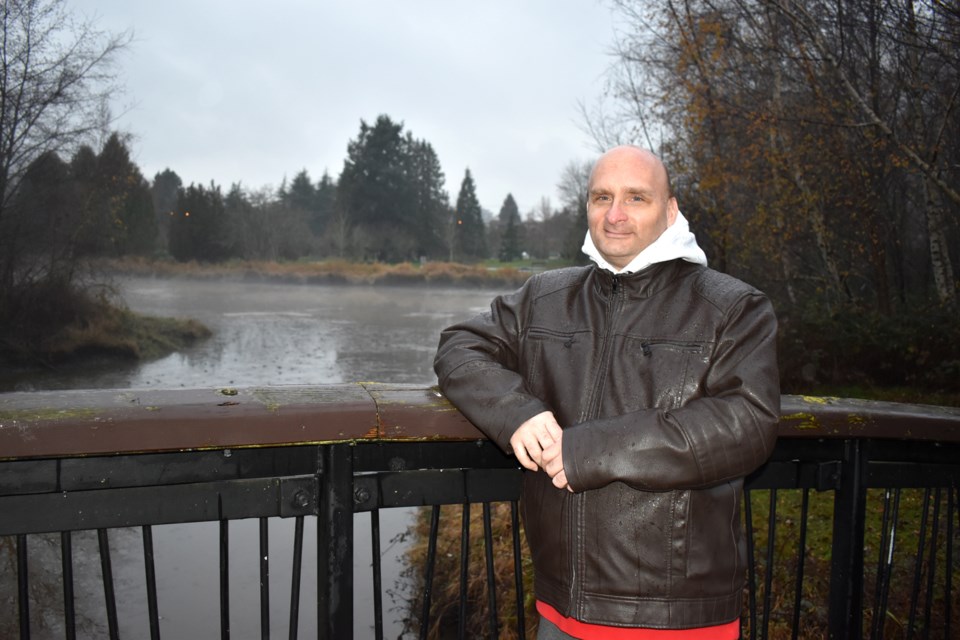 Brian has been clean for eight years, after struggling for more than two decades with addiction.Maria Rantanen

For the first few weeks at a recovery house in Richmond, Brian Prosser couldn’t stop staring at the rock salt in the salt grinder – it was getting on his nerves. Its shape reminded him of his drug of choice.

Finally, a fellow recovering addict wrapped the shaker up in paper – out of sight, out of mind.

Simply getting the crystalline shapes of salt that reminded Prosser of the 12 years-plus he spent every day looking for his next crystal meth fix reduced his thoughts about using.

With almost 25 years of drug use behind him – first crack-cocaine and then crystal meth – Prosser was trying to learn how to live again.

Meth is a hard habit to kick because it gives a sense of focus and energy.

“You do a line or smoke it you get an energy rush – you’re flying for a few hours or longer,” he said, adding “once you start, it’s really hard to stop.”

For more than a decade, his meth addiction had taken him places he didn’t want to be and, one day, he just didn’t want to live as an addict any more - he was going to get a gun and shoot himself.

But instead of calling his dealer from the pay phone that he called from every day, he called 9-1-1 and told the operator he was going to kill himself.

He was picked up and taken to the hospital, and then, from there, he went to a Salvation Army shelter in Langley where he was treated, for the first time in a long time, as a human being.

From there Prosser went to a short-term treatment centre, and then eventually landed in Richmond at Turning Point’s men’s house. He knew he needed to stay away from Langley where he had been deep in his addiction for more than two decades.

For 11 months he was back in the town he had grown up in, and he worked hard on his recovery – he read everything he could about addiction and learned how to live again.

With the on-going opioid crisis and people dying daily of overdoes, there is a laser-focus on tainted heroin and fentanyl use.

Dr. Perry Kendall, who heads the BC Centre on Substance Use, has seen crystal meth use peak in the 1960s, 70s, 80s, with a sharp rise in the early 2000s, and it seems to be nearing a peak again.

Historically, methamphetamines were used by pilots in the Second World War because it give the user razor-sharp focus – it has also been used by long-haul drivers in Thailand for the same reason.

With crystal meth use, there are periodical “big panics” in society, Kendall said, and the attention focuses on people who are lower risk, like high school kids, “rather than focusing on where the actual harm being done which is in the street-oriented population.”

It is also used in combination with heroin, and was found by the BC Coroner in 125 drug-related deaths in 2017 in Vancouver Coastal Health.

There have been some experimental treatments of crystal meth addictions, for example, using slow-release Adderrall, normally used to treat attention deficit disorder. Health Canada recently gave out a grant to study replacement treatment, including for methamphetamine use, Kendall explained.

The “jury is out” on whether extensive use of crystal meth has permanent effects on the user. But the side effects of drug use, for example, elevated blood pressure – which can cause strokes – cardiac arrhythmia and oxygen deprivation to the brain, can cause permanent damage, he added.

Big picture thinking around substance use, however, needs to include decriminalization and destigmatization, Kendall said.

“We have really bad attitude to addiction and substance use is very stigmatized,” Kendall said, adding that it’s treated as a “crime or moral failure.”

While youth will experiment with drugs, it is those people who have underlying factors, like a history of abuse, poor parenting, undiagnosed learning problems and mental health issues, who will fall prey to addictions.

Efforts are underway in B.C. to coordinate substance use treatment, Kendall said, with everything from withdrawal management, support, replacement therapy and recovery. It also includes better treatment at the primary care level.

However, saying the system is “broken” is a misnomer, Kendall said, because there never was a drug treatment system in B.C. to begin with.

During his two decades of drug use, Prosser had never been offered treatment, and he was lucky to end up in a supportive recovery home.

After three months in the recovery home, it was time to unwrap the salt shaker – and he was fine. He had progressed enough in his recovery that the rock-shaped salt no longer triggered memories of his addiction.

It would be another eight months that he would stay at Turning Point, staying on his road to recovery.

Prosser has been clean for eight years– something that makes his mother feel “tickled pink.” He holds down a job working as overnight staff at Turning Point, and, above all, he said, he is happy and productive.