The so-called "foxtail grass" was found near the Phoenix Pond on WestWater Drive
Jun 7, 2021 12:35 PM By: Alan Campbell 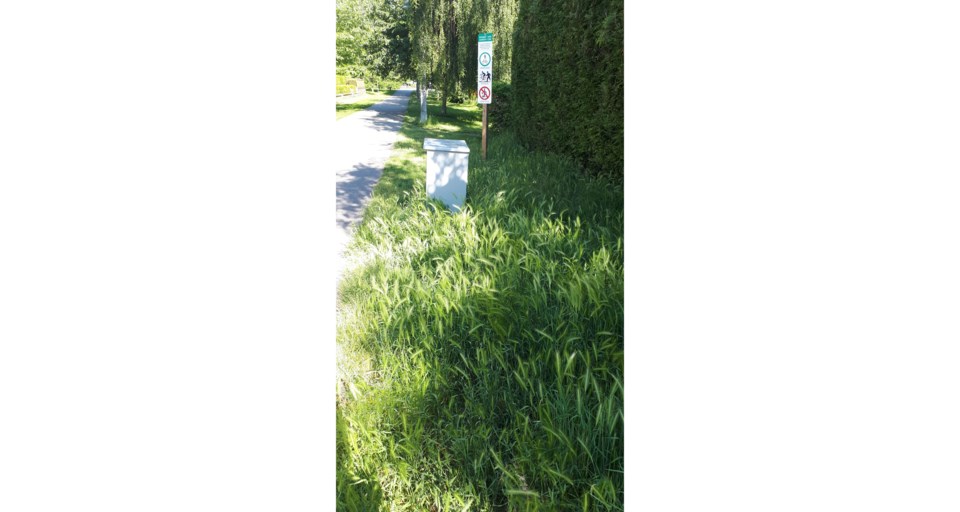 The grass on the right can be dangerous for pets, according to a Richmond landscaperPhoto submitted

A landscaper in Richmond is warning about the emergence of so-called “foxtail grass” on city property in Steveston.

Don Pitcairn alerted the city last week about the dangerously spiky grass – on Westwater Drive, near the Phoenix Pond – which is especially harmful to pets.

Pitcairn pointing out to the city about the grass’ “sharp seeds that are a threat to any pet that walks through it and this area is next to a public walkway, where many people walk their dogs.”

“This grass needs to be cut down, the seed spikes collected and disposed of,” said Pitcairn.

“The plants should then be fenced off, treated with herbicide and replanted with regular grass seed.

“The area in question was mowed last month but not trimmed for some reason, allowing the foxtail to mature and the seed heads to grow.”

Ted deCrom, the city’s parks operations manager, told Pitcairn that a parks supervisor has “been keeping an eye open for any foxtail grass.”

The issue of it being a pet problem, added deCrom, “came to our attention two years ago. This being a common grass will show up now and then and hearing from you will help us control it when it does go to flower and seed.

“We do not use traditional herbicides in Richmond so will not be spraying these sites but will do our best to remove the seed tails when we see or hear about them.”

The Richmond New reported almost two years ago how a group of dog owners appealed to the city to mow down a large patch of foxtail grass at the No. 3 Road off-leash park that had been injuring their pets.

According to the dog owners, the grass’ tall stems had a kind of husk with small spikes that were embedding themselves in their pet’s paws and bellies.

Several of the pets have needed veterinary treatment, causing one such business, the Island Veterinary Hospital, to issue a warning on its website.

The city said at the time that it was aware of some wild grass at the site, but staff didn’t realize how harmful it could be to pets.

The city then promised to mow the offending area down shorter and more often.