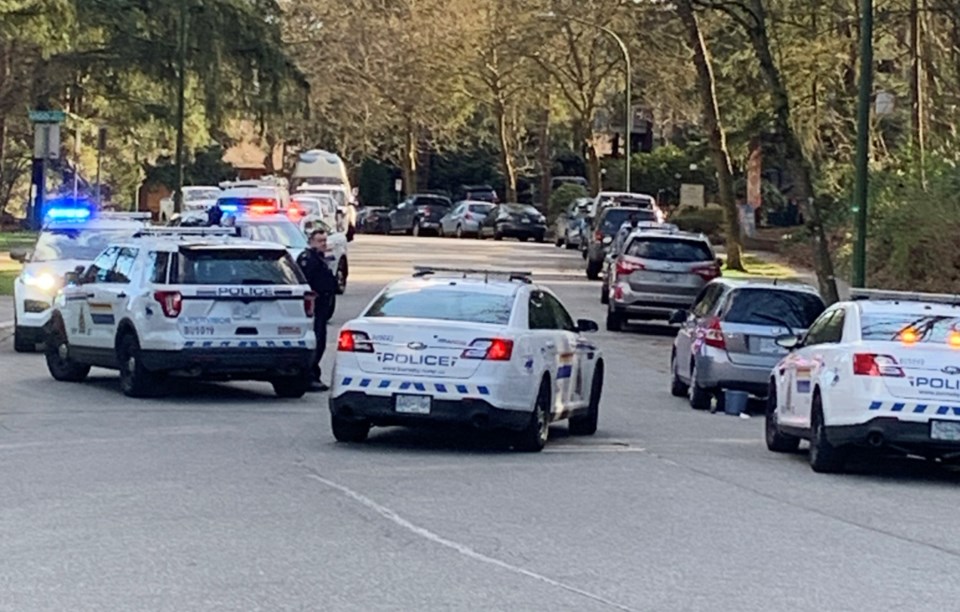 A Burnaby dad is urging parents to have a conversation with their kids about talking to strangers after his 10-year-old son and a friend were approached at Simon Fraser Hills Park by a young man who invited them into his car to smoke marijuana with him and another male passenger.

“He showed them a big bag of drugs and what my son thought was a bag of money as well and tried to get them to get into his car,” said Mike, who didn’t want his last name published because he has heard the suspect involved may have gang connections.

Mike said his son did everything right in response to the encounter, immediately running home and telling his dad about it.

It was about 4:30 p.m. last Wednesday, and Mike, a custom painter, had just gotten home from work.

“They ran into the house in tears – and I ran out of the house on foot with a baseball bat to try to track down the guy,” Mike said.

He said he found the suspect and his male passenger parked by a corner store close to the park, which is also called Peanut Park because of its shape, and dragged him out of the car.

Mike called 911 and, baseball bat in hand, stood between the man and his vehicle so he couldn’t leave – but the police never showed up, he said.

“I waited for an hour and a half, and they never came.”

When Mike’s wife arrived at the scene, he said the suspect threatened her life and the life of his son.

“Then he looks back to me and says, ‘What school does your son go to? I hope it’s safe, it can keep him safe.”

Eventually, Mike said a 911 dispatcher told him to get the suspect’s licence plate number and the police would handle it.

“They never showed up. The guy got away,” Mike said.

But that wasn’t the end of it.

Mike posted information about the incident, including a photo of the suspect and the licence plate of his silver Honda Fit.

Three days later, he got reports from neighbours that the suspect and his car were back – with reinforcements.

“Now he’s got six friends,” Mike said. “They split into groups of three and were wandering around the block.”

Shortly after, he said people came “flying” out of the park saying there were people inside shooting guns.

“They had what looked like real guns,” Mike said.

In total, he said neighbours reported seeing three handguns and one rifle.

“They arrested the guy and two of his passengers at the time. Then they had the K9 searching the park. They were coming out with evidence bags out of the car, out of the forest. It was crazy, crazy, crazy.”

Burnaby RCMP confirmed officers responded to the park Sunday and arrested an 18-year-old male who now faces possible uttering threats and firearms charges in relation to incidents Wednesday and Sunday.

The handguns and rifle reported by neighbours ended up being airsoft weapons, police said.

Mike said he was glad police arrested the suspect, but it would have been better if they had responded to his first call on Wednesday.

“I had the guy for an hour and a half,” he said. “All the police had to do was roll up and throw him in the back, and we wouldn’t have had to deal with this, the whole neighbourhood full of cops and dogs and everything. That could have been completely avoided if they had been able to respond the first time.”

At the end of the day, Mike said the incidents have left him feeling grateful that his son got a talk about strangers just in time.

“It’s so vitally important to have that talk with your kids,” he said. “This is a conversation that we’ve just recently had with him because he’s at that age where he’s getting more freedom to be able to play in a little bit bigger boundaries.”

With everything that’s happened in the neighbourhood, though, Mike said most parents are now keeping a closer eye than ever on their kids.