Province records second case of a vaccinated person getting a blood clot.
May 13, 2021 2:34 PM By: Glen Korstrom 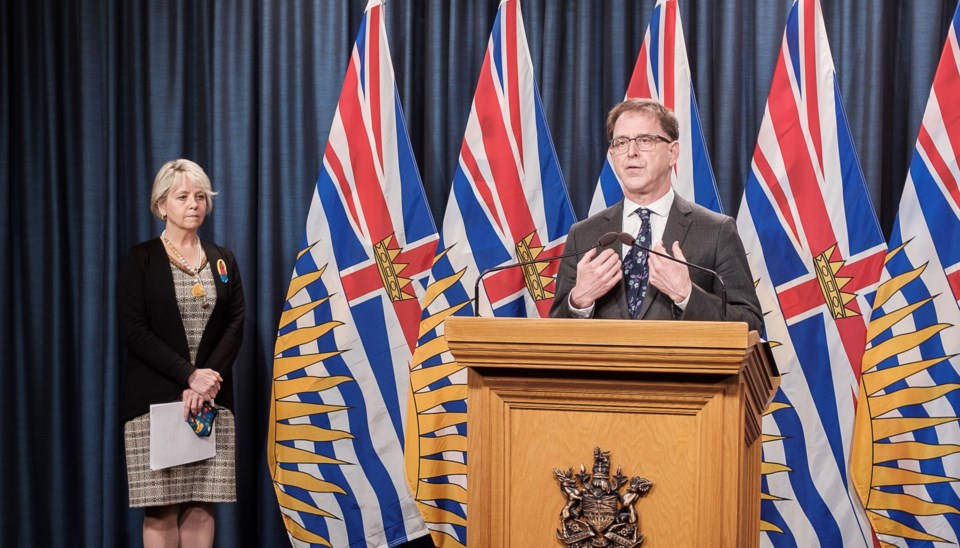 Serious COVID-19 infections in B.C. have declined, with the number of those hospitalized with the disease at a four-week low of 413, according to new provincial data.

Unfortunately, however, B.C. recorded its second case of an AstraZeneca-vaccinated person coming down with a blood clot, related to a condition known as vaccine-induced thrombotic thrombocytopenia (VITT).

That person is a man in his 40s, who is in stable condition in a Fraser Health hospital. The first person to have had a blood clot after being vaccinated with the AstraZeneca vaccine was a woman in her 40s in the Vancouver Coastal Health region.

"This is a rare, but very serious condition, and we are following it carefully," said provincial health officer Bonnie Henry.

She has said that when this condition arises, it tends to be in people between four and 28 days after getting a dose of the AstraZeneca vaccine.

Henry explained that VITT is a different kind of blood-clotting condition than can arise from other medications. VITT, she said, provokes an immune response that develops antibodies against the body's platelets.

Symptoms of having a VITT-related blood clot include:
• persistent severe headache;
• shortness of breath;
• chest pain;
• severe abdominal pain: and
• swelling or redness in a limb.

Anyone with those symptoms should dial 8-1-1 or contact their doctor, Henry said.

One of the more surprising things that Henry said on May 13 was that 30 people who have been vaccinated with at least one dose of one of the several vaccines available in B.C. have died from COVID-19. Of those, four people had received two doses of vaccine. This makes clear that even being fully vaccinated does not mean that one cannot die from COVID-19.

It was not clear how old the people were who died while being infected with COVID-19 and having had two doses of vaccine. Most people who have died, however, have been people older than 70.

That revelation followed Henry providing a statistic that the vast majority, or 98.2%, of 79,480 known COVID-19 infections detected between December 27 and May 1 were in people who have not been vaccinated, or were in people not yet vaccinated for 21 days.

She explained that this was reason to believe that vaccines are effective.

The strange part of providing that statistic was that the first vaccine dose in B.C. was provided on December 16, so all cases detected before January 6 would have been in this category. The statistic she provided involved a breakdown of 79,480 cases for the December 27 through May 1 timeframe. It therefore included 5,679 cases that were detected in a timeframe when no one in B.C. had been vaccinated for at least 21 days.

If those cases are removed, her thesis remains intact: the vast majority of those who have caught COVID-19 since vaccinations started to be rolled out have been in people not vaccinated.

Of the 1,340 cases of people who were infected and had received at least one dose of vaccine, 141 were hospitalized and 13 were moved to intensive care units. It was not clear what the hospitalization pathway was for the 30 human beings who died.

As for the 413 people now in B.C. hospitals with COVID-19, there remain 141 people in intensive care units. Five people died overnight while fighting infections. That raises the province's death toll from the pandemic to 1,632.

The province put out a news release yesterday to say that more than half of all eligible adults in B.C. have now received at least one dose of vaccine.

The number of newly detected cases continues to be significantly below the level seen a month ago, as health officials identified 587 new infections overnight. That brings the total number of infections, since January 2020, to 137,810. Of those, more than 94.5%, or 130,310 people are deemed by the province to have recovered.

Henry explained for the first time that the province no longer provides tests to COVID-19 patients to determine if they are registering negative. Instead, the standard practice is to give patients 10 days from the start of symptoms. If the patient seems to be recovering, the province's diagnosis is that they are no longer "infectious." That determination is how the province tallies its total number of assumed recoveries.

The number of those actively infected with COVID-19 in the province fell for the 14th consecutive data update, to 5,691 people.

Henry did not say whether restrictions on travel and on eating in restaurants would be extended past May 25, at the end of the May long weekend, but she warned: "don't start thinking about making plans now."

There remain three outbreaks at long-term care homes in B.C., all of which are in the Interior Health region:
• Orchard Haven in Keremeos;
• Sandalwood Retirement Resort in Kelowna; and
• Spring Valley Care Centre in Kelowna.