Wildfire between Oliver and Osoyoos now mapped at 2,000 hectares

Blaze is being described as 'extremely aggressive' by wildfire officials.
Jul 20, 2021 2:45 PM By: Chelsea Powrie / Castanet 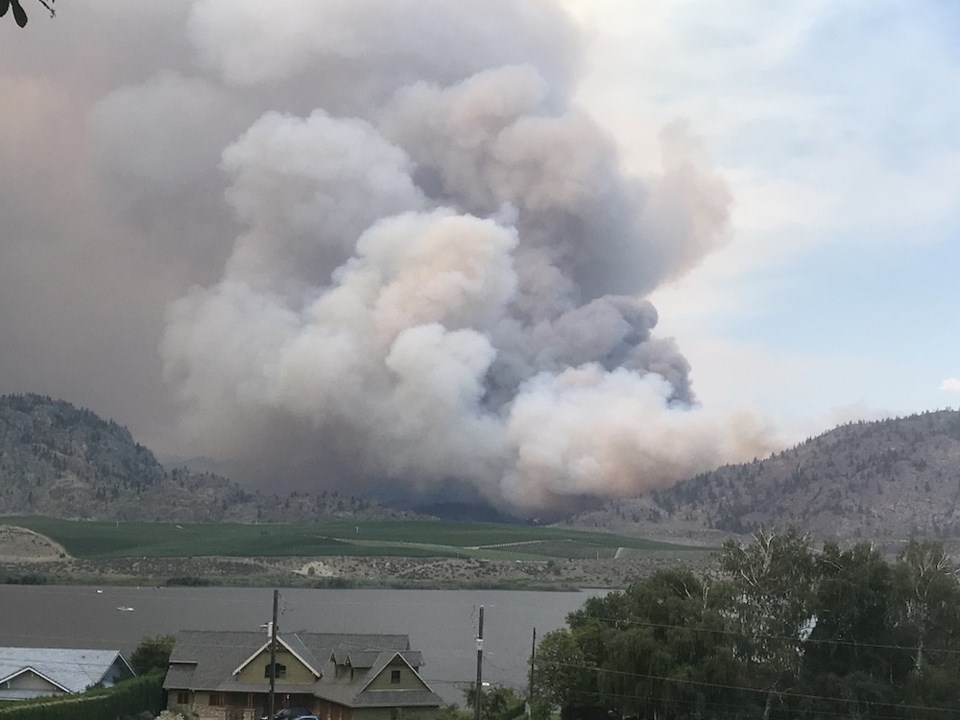 A reader-submitted photo of the Nk'Mip Creek wildfire. Teya Coty

The Regional District of Okanagan-Similkameen (RDOS) has provided Emergency Support Services to approximately 350 individuals to date due to the Nk'Mip Creek Wildfire.

A reception centre has been set up in Oliver at the Legion. Registration can also be done online.

Anyone who is under evacuation order is eligible and will be provided with a place to stay, providing they are a full-time resident. Anyone who is a guest is being asked by the various impacted municipalities, the RDOS and Osoyoos Indian Band to go back to their homes.

"ESS is really intended for people who have residences in this area, it's not meant for visitors who are at a campground or anything like that. Those people are asked if they can head back their homes. It's for people who live in the area who are displaced," RDOS communications manager Erick Thompson said at a media briefing Tuesday.

Also at the briefing were representatives from Osoyoos and Oliver, who said to their knowledge no permanent structures have been lost in their areas.

Erica Louie with the Osoyoos Indian Band said a few homes are currently in a dangerous area, and that the Oliver Fire Department was dispatched to the scene Tuesday afternoon.

Nk'Mip Creek wildfire is estimated at 2,000 hectares and out of control. A state of local emergency is in place in Area C and Area A of the RDOS, as well as Oliver and Osoyoos.

BC Wildfire spokesperson Dale Bojahra says Nk'Mip Creek is an "extremely aggressive" wildfire, using the example of its initial growth of six kilometres in just a few hours to illustrate his point.

As of Monday afternoon, the wildfire was mapped at 2,000 hectares.

"At this point, we have a number of ground crews and heavy equipment working on the fire. A lot of focus on the west and southwest flank, as you would imagine. That's where we have the most exposure to the community. So a lot of focused on those flanks to try to protect the homes that are nearest to the fire," Bojahra said.

The change Tuesday is the wind direction. On Monday, when the wildfire began, winds were coming primarily out of the south. That is expected to change today, pushing out of the north, prompting recommendations for evacuation alerts in Osoyoos Tuesday morning.

Bojahra said BC Wildfire understands the public is anxious for updates, and they do their best to do so a few times a day.

"The crews are working out their heart and trying to do their best to provide updates as the day goes on. But we are limited in our frequency, as far as updating, you know, beyond that, two to three times a day."

He also wanted to urge respect of evacuation orders.

"We've had other of incidents of folks, when an order comes in, refusing to leave their property," Bojahra said.

"Then we have those same people feeling they need support to get out of where they've stayed. It pulls resources away from fighting the fire. ... It is extraordinarily difficult for our crews to deal with when we're trying to fight fire than having to go and check on people who have refused an evacuation order."

He also said the general public should in general stay clear, as well as staying off the nearby lakes.

"Please, we're not looking for spectators," Bojahra said, explaining it can be dangerous.

"All that does is pull our resources from our job and the important work we have to do."