U.S. arrest warrant out for ex-Vancouver lawyer on pump-and-dump charges

Fred Sharp faces two criminal charges in the United States for allegedly orchestrating stock scheme
Graeme Wood Aug 30, 2021 12:32 PM
Listen to this article
00:08:41
The United States Department of Justice has issued an arrest warrant for and frozen assets of West Vancouver offshore shell company facilitator Frederick Sharp, after criminal charges were laid against him related to a massive pump and dump scheme alleged by the Securities and Exchange Commission.

While Sharp, 69, has yet to formally respond to the charges, his co-accused Avtar Dhillon, a prominent Vancouver-based pot stock promoter residing in California, has already relinquished his passport, paid a $1.5-million security bond and attached a GPS monitoring device to himself while awaiting the U.S. government’s next steps.

American and Canadian authorities have not yet confirmed where Sharp is, or if he has been notified of the charges. He is known to reside in the wealthy West Vancouver neighbourhood of Caulfeild, in a home valued at $1.9 million.

And while Dhillon appeared before a judge on August 12, no court appearance has yet been set for Sharp, who stands accused by the commission and the Federal Bureau of Investigation of being the key facilitator of over $1 billion worth of gross, illegal sales of stock in hundreds of penny stock companies.

Additionally, Sharp used stock touts to “pump” the stocks prior to “dumping” them “surreptitiously” via the shells to retail investors, authorities allege. In doing so, Sharp is alleged to have used a number of Canadians to orchestrate the network of offshore corporate nominees tied to an expansive list of offshore shell companies stretching across 24 jurisdictions. 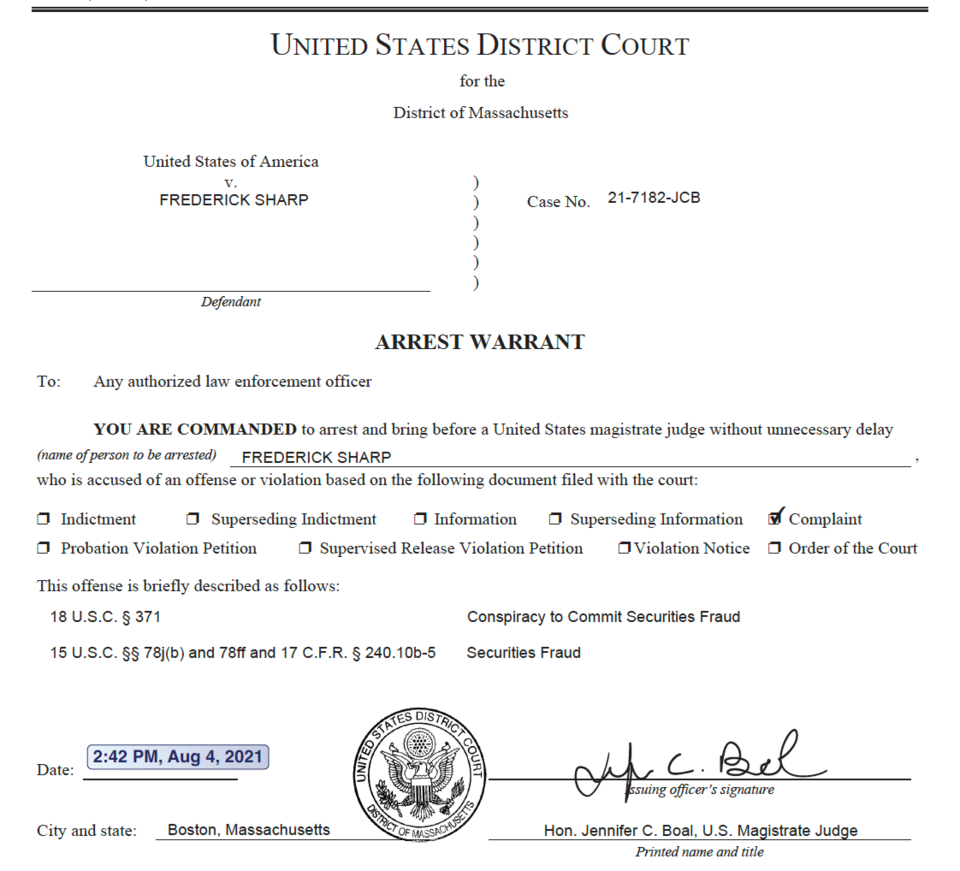 The arrest warrant for Fred Sharp of West Vancouver, issued by the U.S. District Court of Massachusetts on August 4, 2021. By Submitted

Sharp is charged with securities fraud and conspiracy to commit fraud along with associates Mike Veldhuis of Vancouver, Courtney Kelln of Surrey and Luis Carrillo of Mexico. They are all presumed innocent until a court rules on the allegations.

While the August 5 charges are the first criminal allegations against Sharp, they are not his first encounter with stock-related regulatory enforcement measures.

Sharp, 69, was called to the B.C. bar in May 1981. On January 23, 1995, his name first became publicly linked to improper activity, when he was suspended by the Law Society of B.C. for one year. Then, Sharp admitted to knowingly working with serial fraudster Michael Mitton, who was previously prohibited from acting as a company officer, but nevertheless became a promoter of a Vancouver Stock Exchange-listed company that Sharp represented. Sharp’s professional misconduct related to assisting Mitton’s share sales scheme that illegally generated half a million dollars.

In 1997, Sharp relinquished his licence to practice law and went on to incorporate the Vancouver office of Panama investment firm Mossack Fonseca on May 29, 1998. Although it dissolved April 12, 1999, Sharp carried on business under different corporate entities elsewhere.

In what may turn out to be an explicit case of life imitating art, Sharp wrote a fictional book in 2002 about securities fraud, the SEC noted in its charges.

A passage of the book states: “Eventually [the client] took greater positions in the stocks, sharing the take with fewer partners. This meant he had to disguise his shareholdings in order to avoid securities disclosure requirements and trading restrictions. Offshore companies were ideal for his purpose. They came from around the world with nominee directors, but were still subject to his control. The perfect situation for his masterly stock manipulations.”

Sharp subsequently incorporated Corporate House Equity Inc. on August 14, 2007, as the sole director. At the time the company said: “We provide confidential and personalized assistance to people and businesses that wish to create advantageous financial structures both inside and outside their home countries.”

In 2013, Corporate House drew negative attention when Vancouver Sun reporter David Baines reported Corporate House brokered a deal for a tax credit worth as much as $13 million from the Vancouver Museum for Michelangelo sculptures that turned out to be nearly worthless. No wrongdoing was ever alleged by authorities.

The case against Sharp has caught the attention of Baines, who is now retired.

“In terms of the scope of the investigation, the duration of the alleged scheme and amount of money involved, this is the largest penny stock enforcement action, regulatory or criminal, I have ever seen, in Canada or the United States,” said Baines.

In May 2016 Sharp became more widely known across the country as the Canadian face of the Panama Papers – a massive leak of documents of Panamanian company Mossack Fonseca that revealed a vast network of offshore companies acting as tax havens for elites. Sharp helped register 1,167 offshore entities from his Vancouver office, according to the documents. Although Sharp publicly derided the leak as illegal and contrary to the rule of law, and defended the legalities of offshoring wealth to the media, the Panama Papers have since led to a global multibillion-dollar collection effort by tax authorities claiming avoidance or evasion practices.

The SEC and FBI do not refer to the Panama Papers in their charging documents. But Mike Veldhuis, one of four criminally co-accused persons in the Sharp case, has previously launched a lawsuit against the Canada Revenue Agency’s efforts to gather financial information about him and his companies, based on his connections to Sharp, following the leak. Veldhuis, a B.C. resident, is now alleged to have formed what the SEC dubs the Veldhuis Control Group, a network of stock players who illegally sold shares through Sharp’s shells. 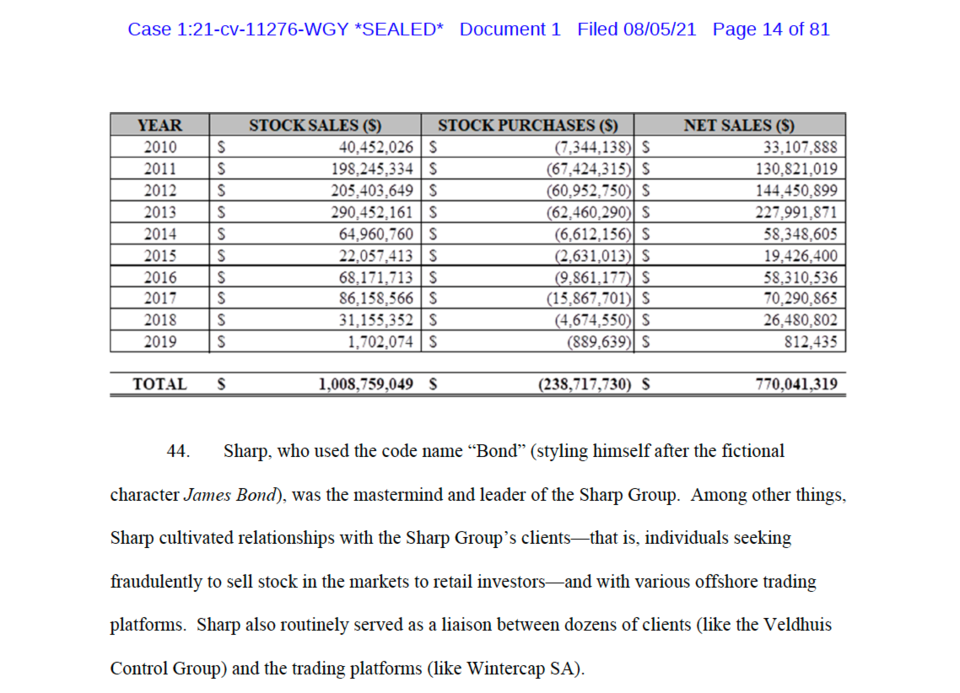 Charging documents from the FBI and SEC show alleged illegal stock sales totalling over $1 billon in gross revenue for clients and associates of Fred Sharp. By Submitted

Also, criminally charged in connection to the case is Sharp’s associate Courtney Kelln of Surrey, as well as multi-company director Luis Carillo, of Mexico.

Additionally, Sharp and/or Carillo associates Paul Sexton of Anmore, Jackson Friesen of Delta, Graham Taylor of Vancouver, Zhiying Yvonne (Chen) Gasarch of Richmond and Amar Bahadoorsingh, a resident of Vancouver and dual citizen of Canada and the United Kingdom, are all facing related civil claims by the commission.

On Aug. 20, a U.S. District judge ordered 106 bank and brokerage accounts – all but 10 from Canada – belonging to Sharp, Veldhuis, Sexton and Taylor to be temporarily frozen. Institutions include TD Canada Trust, Research Capital Corp., PI Financial Corp., Leede Jones Gable Inc., Haywood Securities Inc., Canaccord Genuity Corp., Bank of Montreal and Coast Capital Savings. The order stated the freezes were necessary, as the commission had shown the “defendants may dissipate and conceal assets” that could be required to pay civil penalties.

“This case concerns a sophisticated, multi-year, multinational attack on the United

States financial markets and retail United States investors by foreign and domestic actors,” alleged the SEC complaint against the eight Vancouver-linked defendants, plus Maryland-based stock tout William Kaitz. “These actors schemed to sell fraudulently hundreds of millions of dollars in stocks in the United States markets.”

In April, the International Consortium of Investigative Journalists reported governments have recouped more than $1.36 billion in back taxes and penalties as a direct result of the Panama Papers. Canada has reported it has not recouped any money from the leak but has “re-assessed” about $16 million in taxes, according to the consortium. In March 2019, Canada announced an investigation of an alleged attempt to evade $77 million in non-resident withholding tax by using some records obtained in the leak, which is reportedly connected to about 900 Canadians.

with files from BIV and The Victoria Times Colonist