A family on the brink of deportation allege they were scammed by an immigration consultant. As they await a return to Colombia and violent threats on their life, some are saying the government needs to crack down on shady consultants.

Yajhana Ponce was walking down the street in the northern Colombian city of Valledupar when she saw a man pull a gun. Ponce turned to her cousin, who told her run and hide. Slipping into a nearby house, Ponce looked through a window just as her cousin was gunned down.

“She witnessed it,” said Ponce's husband Luis Vanegas from an immigration detention centre in Surrey, B.C.

That was in 2004. Over the coming years, the gunman from the far-right paramilitary group, the United Self-Defence Forces of Colombia, would kill another cousin, and beat up, threaten and extort the family on a monthly basis — all for refusing to join the terrorist group.

When the paramilitary group was split up in 2006 in a demobilization process, some of the killers went to jail. Ponce was among a few that testified against the gunman. But a few years later, they were out again as part of a plea deal, splintering into new armed groups.

“They pay police, they pay politicians, intelligence,” said Vanegas. “They said, ‘It’s your fault. We’re in here because of you. We’re coming for you.’”

Soon, Vanegas said they were paying nearly $700 a month in extortion fees, a large sum for a heavy machinery technician and nurse. When Vanegas once again refused to work for the group in 2017, he said they sent a motorcycle hit squad after them, firing at them three times through the window.

The bullets missed. When they went to press charges, Vanegas said an official in the prosecutor's office told him the only way to stay safe would be to flee the country.

At the time, thousands of asylum seekers were escaping the U.S. across the Canadian border. When the couple saw that, they said goodbye to their family and jumped on a flight to Miami. 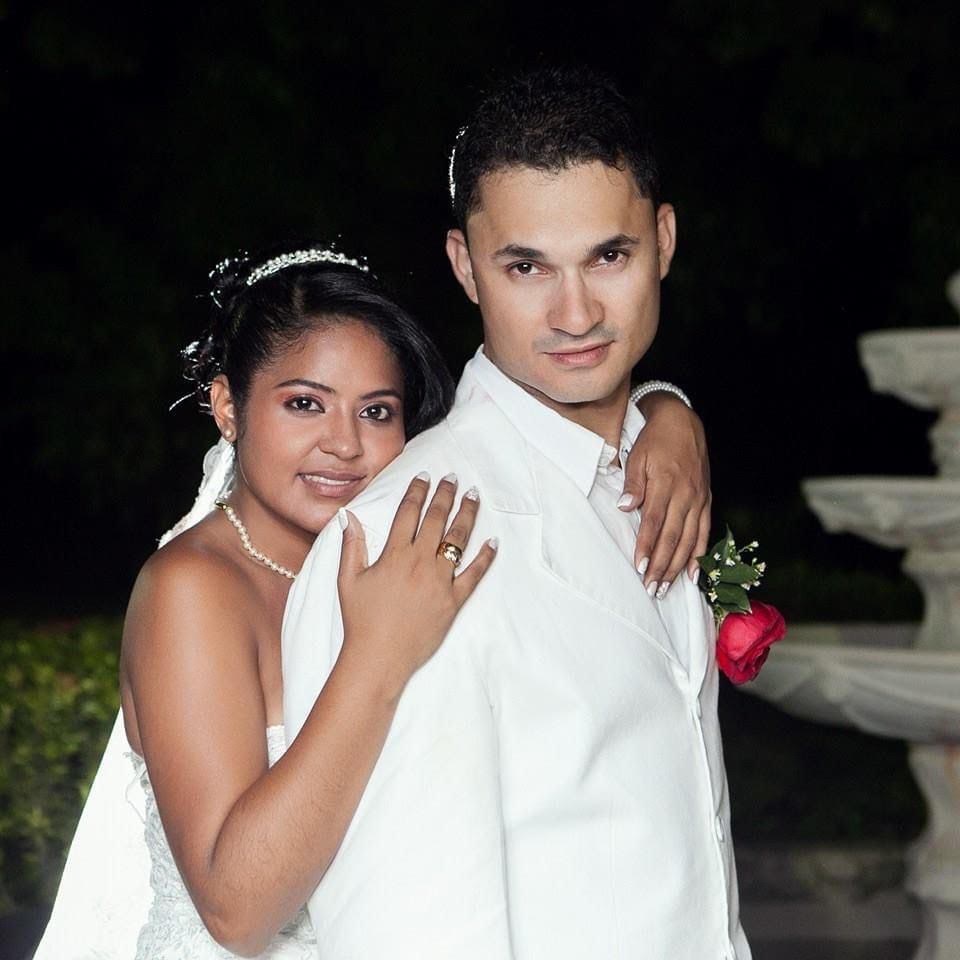 Yajhana Ponce and Luis Vanegas were married after she witnessed one of her cousins get gunned down on the street. via Luis Vanegas

Three flights and a taxi ride later, Vanegas and Ponce presented themselves at the border crossing near Aldergrove, B.C., where they applied for asylum. But within 24 hours, their application was denied and the Canada Border Services Agency (CBSA) sent them back to Bellingham, Washington.

Friends told them a shelter in Buffalo, New York was taking in refugees, so they used the little money they had saved and crossed the continent again.

A month later, they took another taxi to the Canadian border — this time, they were allowed through. They spent part of the fall at the Westmount YMCA in Montreal as their refugee application was filed. They studied French, got a work permit and on Jan. 14, 2018, their daughter Salomé was born a Canadian citizen.

Life has been a rollercoaster since. Their asylum application was denied again, but in a federal court, they were granted an appeal. Their lawyer suggested they move to another province and apply to stay under humanitarian and compassionate grounds.

By April 2019, the young family had relocated to Surrey. Vanegas worked in residential and commercial demolition; Ponce took care of their young daughter who was now on medication after she developed a gastrointestinal condition.

“We started to organize as a family,” said Vanegas.

That meant hiring an immigration consultant to ensure their application to stay on humanitarian and compassionate grounds went through smoothly.

“Then COVID came. It put a brake on everything. Everyone was working from home,” he said.

Still, Venegas said the immigration consultant — whose name Glacier Media has chosen to withhold — gave the family a receipt for an over-$3,000 bill, covering the cost of the government application and half of the $5,000 fee she charged for her services.

That’s when the decision came back on the family’s appeal: denied.

Immigration, Refugee and Citizenship Canada ruled that the safe third country agreement — where refugees seeking asylum are forced to apply in the first country they flee to — meant they should have applied in the U.S. and not Canada.

The safe third country agreement, said Vancouver-based immigration lawyer Zool Suleman, has been heavily litigated in court cases since the Trump administration ramped up deportations in 2017. To date, the law has been upheld.

“This is a live issue that’s not going to get resolved anytime soon,” Suleman told Glacier Media.

The couple’s humanitarian and compassionate case was the only hope they had left, something Suleman said takes into consideration such factors as the best interests of the child, a family’s support network and any health problems.

All of that, friends of the family tell Glacier Media, make them perfect candidates.

“The proof this woman had given us to show us she had sent the application, it was fake evidence,” said Vanegas. “The woman gave us falsified receipts.”

Glacier Media reached out to the immigration consultant but did not hear back in time for publication. This is not the first time the certified consultant has been accused of ethical breaches.

She was reprimanded by the Committee of the Immigration Consultants of Canada Regulatory Council in 2017 for making mistakes, and later failing to correct those mistakes, on a client’s sponsorship application. The consultant was also found to have repeatedly failed to complete work in a timely manner and did not adapt to changing laws and regulations.

For those breaches, she was ordered by the oversight body to complete a remedial education program.

The Colombian couple is not the only one alleging fraud carried out by B.C.-based immigration consultants.

Migrant advocate groups say such cases have been on the rise, with many using the confusion around the pandemic to take advantage of people.

That’s prompted the Mexican consulate in Vancouver to warn its counterpart in the federal government. They have also issued a number of recommendations to the Mexican community in B.C., warning them to be wary and temper expectations.

“It’s a huge problem that has to be attended by the Canadian authorities,” said Mexican Consul General Berenice Diaz Ceballos, noting many are afraid to come forward because of their precarious immigration status.

“There’s a lot of fraud going on. The authorities need to get involved. They need to strengthen the capacity of the state to step in.”

Peter Liang, a spokesperson from Immigration, Refugees and Citizenship Canada, declined to comment on the case, citing privacy.

“In particular, it will have tools to investigate professional misconduct and discipline its licensees and will also be subject to significant government oversight to ensure public protection,” wrote the spokesperson.

The college is anticipated to open sometime in 2021.

Suleman said he has seen clients come to his practice after abandoning other immigration lawyers or consultants.

“Sometimes they had unrealistic expectations or were given unrealistic promises,” said the lawyer.

By the time a pattern of fraud is recognized, it’s often too late.

“There’s a delay in the oversight response,” said Suleman. “It’s such a sad situation.”

“These things do come up. Unfortunately, the cost is paid by the client. Their lives are ruined.”

A Canadian citizen, Salomé turned three this year, but is scheduled to be deported with her parents on June 17, a move her father, Luis Vanegas, says will put her in grave danger. By Luis Vanegas

LETTER TO THE PRIME MINISTER

Last month, Vanegas was scheduled to appear before an immigration official to work out the details of their expulsion order.

After three years of trying to keep his family away from violence and remaining on the right side of immigration law, he skipped the meeting.

“We’ve always sought out the legal path,” he said. “But how can I be a good father if I bring my family towards death?”

Since fleeing Colombia, the gunmen have threatened other family members across the country: his brother had his head split open when thugs came at him with the butt of a gun; the gunmen have been to his mom’s house, extorting her for money; and another uncle fled to Venezuela after the threats escalated.

“The situation never got better. It got worse,” said Vanegas. “If I go to Colombia, they’re going to find me.”

The only difference, said Vanegas, is this time he has a three-year-old daughter with him — a daughter whose medicine is not sold in Colombia.

“What we are asking for is a home, not a return to danger,” wrote Vanegas.

On May 28, Mendicino’s office sent back a rote response saying they’d get back to them in six weeks.

The family wouldn’t have that long.

Last Saturday, at a routine traffic stop, an RCMP officer pulled up Vanegas’s file and saw he had a detention order against him.

The entire family was detained and brought to an immigration detention centre in Surrey. During the day, the father can see his wife and daughter, but at night, they are forced into separate rooms.

Vanegas said his three-year-old struggles to go to sleep and hasn’t gone to the bathroom in four days, a worrying development for a child suffering from gastrointestinal complications.

The family was scheduled to get vaccinated against COVID-19 on June 20. But with their removal from Canada expected to go ahead today (June 17), that’s unlikely to happen.

Colombia has been under significant strain as it continues to cope with one of the highest rates of COVID-19 cases in the world and a limited supply of vaccine. Without being vaccinated, Vanegas worries claiming asylum in another country will be nearly impossible.

“They’re going to deport us,” said the father, dejected over his daughter’s fate a day before their removal. “They are sending a Canadian citizen to a place where she’s going to be tracked down and vulnerable.”

Stefan Labbé is a solutions journalist. That means he covers how people are responding to problems linked to climate change — from housing to energy and everything in between. Have a story idea? Get in touch. Email slabbe@glaciermedia.ca.