COVID-19 cases could hit almost 3,000 a day in B.C. if nothing changes: modelling

More than 1.2 million doses of Pfizer, Moderna or AstraZeneca have been delivered, with 26.7 per cent of British Columbians now vaccinated.
Apr 16, 2021 9:35 AM By: Cindy E. Harnett / Times Colonist 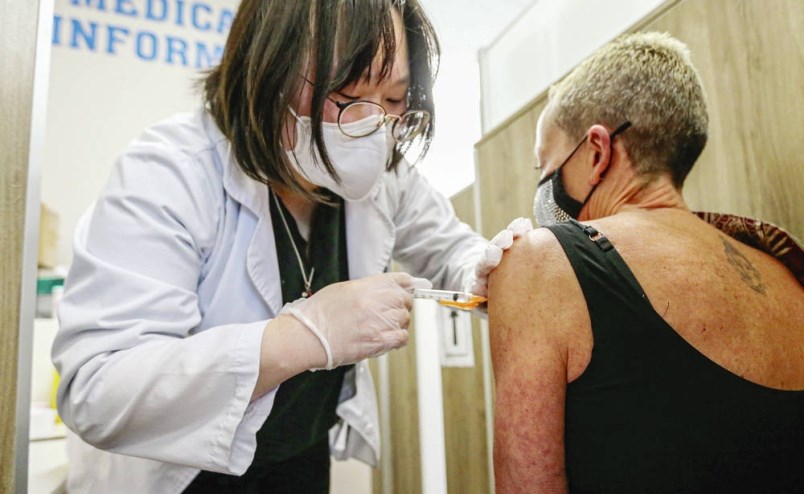 New COVID-19 cases could reach almost 3,000 a day in B.C. by the end of April if people don’t reduce their indoor contacts, according to modelling presented by B.C.’s top doctor on Thursday.

“We cannot let up right now,” said Dr. Bonnie Henry, provincial health officer. “We need, all of us collectively, to reduce our infectious contact. So that’s reducing those indoor contacts, where we’re not using masks, where we have poor ventilation, where we’re not keeping our distance. That is something we all need to do right now.”

Travelling is spreading the virus and leading to chains of transmission that move around the province, “and we have seen the impact of that,” said Henry, who on Thursday reported record-high active COVID-19 cases, hospitalizations and ICU admissions.

Henry announced 1,205 new cases of COVID-19, including 38 new cases in Island Health. More than half the new cases, 730, were in the Fraser Health region, which continues, with Vancouver Coastal, to drive transmissions in the province.

Dr. Richard Stanwick, chief medical health officer for Island Health, said the Island will also see daily case counts climb even higher if people don’t take Henry’s warning seriously and reduce contacts. “If we don’t do what Bonnie is asking of us, we’ll have the same experiences of Vancouver Coastal and Fraser Health.”

There are 528 active cases in Island Health, according to the B.C. Centre for Disease Control, and 1,729 people are in isolation. “It’s going to take some real energy to get those numbers back down,” said Stanwick.

Contact tracers are finding 87 per cent of an infected person’s contacts are on the Island, but “we’re still averaging 2.5 contacts per person, which doesn’t sound like a lot, but then when you’ve got 50 to 70 cases, that’s a lot.”

Restrictions on indoor social gatherings — which are limited to household members — as well as indoor restaurant dining, fitness classes and faith gatherings are having an effect, said Henry.

Positive-test rates are falling slightly, although not enough to bend down transmissions.

Variants that are more highly transmissible now make up about 65 per cent of all new COVID-19 cases in the province, just four months after the first B.1.1.7 or U.K. variant was detected in late December in Island Health.

Previously, one case of COVID-19 might infect three other people in an extended family of 10, but the variant strains infect all members, said Henry, noting that while the variants are more transmissible, the safety measures that stop them from spreading are the same.

The modelling Henry presented showed the positivity rate for those tested for COVID-19 in Island Health is 4.6 per cent (it recently peaked at 12 per cent in the province).

The transmission rate — the number of people each case of the virus spreads to — is above one in all health regions across the province, including Island Health, where it is 1.5. Public health officials are aiming to get the rate below one.

On the Island, the higher transmission rate is partly due to travel — people coming to the Island from the Lower Mainland and vice versa, said Stanwick, adding a variant like the U.K. one, which is dominant on the Island, “capitalizes on the slightest slip in self-protection.”

“People need to practice very, very carefully all of the public health orders to stop the spread of this particular virus,” said Stanwick.

Most of those in hospital with the virus are still older — age 60 to 79 — but the increase in hospitalizations is being driven by those 40 to 59, especially since the middle of March. Deaths remain concentrated in older age groups.

“That is why it is so important that we continue to focus our age-based immunization program on those down to age 40,” said Henry.

Three more deaths were reported on Thursday, for a total of 1,520 in the province. There are outbreaks in seven long-term care, assisted-living and independent-living homes, and in five acute-care facilities, ­including Nanaimo Regional General Hospital.

Henry addressed transmissions amongst school children, showing most cases of COVID‑19 among students and staff were acquired outside of school in their households or communities.

When COVID was transmitted within a school setting, it was usually limited to one or two additional cases.

The trend was the same in Vancouver Coastal health region, where 124,000 students and staff, 699 tested positive, and 55 acquired the virus at school.

The data shows transmission is much lower when students are in a structured environment with consistent COVID-19 safety plans, said Henry, who acknowledged exposures in schools are disruptive and cause anxiety.

Teachers and other school staff — along with first responders — are being prioritized for vaccines, with immunizations started in areas with the highest community transmission.

Anyone over age 55 is eligible to get the AstraZeneca vaccine from a B.C. pharmacy.

More than 1.2 million doses of Pfizer, Moderna or AstraZeneca have been delivered, with 26.7 per cent of British Columbians (including 26.6 per cent in Island Health) now vaccinated.

Vikram Bawa, owner of Fort Royal Pharmacy Group, has been offering vaccines from two of his three locations and will finish administering the last of 600 doses this weekend. Bawa said the company got more than 1,000 emails and more phone calls asking for the vaccine.

With respect to reports of blood clots linked to AstraZeneca, Bawa said the birth-control pill, smoking and COVID have much higher rates of clots.