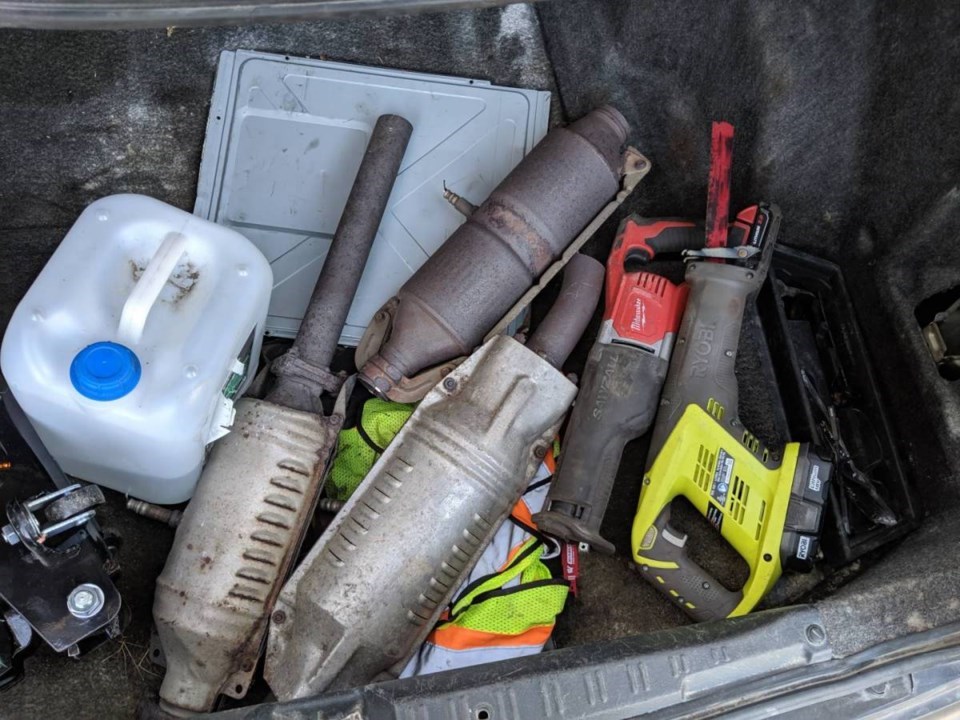 The theft of the exhaust emission devices has led to hundreds of deductible insurance claims generated from vehicle owners, with the Insurance Corporation of B.C. reporting losses close to $2 million last year.

The persistent crime has triggered the Vancouver Police Board to call on the B.C. government to amend the Metal Dealers and Recyclers Act to put the onus on scrap dealers to collect identification from sellers.

Currently, there is no requirement for a scrap dealer — where converters are typically sold for up to $200 each for the precious metals inside them — to report a transaction.

“This makes Vancouver Police Department investigations more challenging because suspected offenders leave the city of Vancouver with the stolen converter,” said a report attached to a police board resolution forwarded last month to the B.C. Association of Police Boards.

“Identification is not required to sell catalytic converters, which complicates suspect identification.”

Vancouver police investigated 203 reports of converter thefts in 2020 and said 71 thefts occurred between Jan. 1 and March 6 of this year; for the same period in 2020, vehicle owners filed 33 reports.

Police say a converter, which converts pollutants into less harmful emissions before they leave a vehicle’s exhaust system, can be stolen in seconds with a blow torch or cutting tool.

Thieves often target vehicles higher up from the ground such as minivans and SUVs to allow easier access to the underside of a vehicle.

In the Vancouver thefts this year, Hondas accounted for 37 per cent of the targeted vehicles followed by Fords (26 per cent) and Toyotas (seven per cent), according to a VPD news release issued Thursday.

In Coquitlam and Port Coquitlam, which is the jurisdiction of the Coquitlam RCMP detachment, the crime is on pace this year to break a new record in the two municipalities.

“It’s rare that I come into work and I do not see at least one catalytic converter theft on the watch report from the night before — and that’s minimum, sometimes there’s like four or five,” said Const. Deanna Law, a Coquitlam RCMP media relations officer.

“Not all [thefts] are reported,” Law said. “These are just the ones that are reported to police and ICBC, so you can probably guarantee there’s even more than what we’re hearing about.”

The $1.9 million represents 927 claims submitted to ICBC that have costs associated. There may be additional thefts for those without ICBC comprehensive insurance, according to an email from the corporation, which confirmed that not all victims report a theft to the agency or police.

Claims costs also exclude the cost of a person's deductible.

“It is a priority for them, they have made some recent arrests and they continue to target prolific offenders whose main hunger on the street is for catalytic converters,” Sturko said.

Last August, the team’s work led to 13 charges against three men related to the theft of converters, which occurred between March and July 2020.

“It continues to be a persistent problem that comes and goes with the rise and fall of the precious metals that are contained within in them,” Sturko said.

“Unfortunately, with some of the social issues that people are experiencing, they use these thefts as a way of fueling things like addictions or just to get money.”

Officers who spoke to Glacier Media this week say thieves are after the platinum, rhodium and palladium in the converters.

The Vancouver police board report said there is a metal recycle dealer in the Lower Mainland who is believed to be instructing individuals to bring him catalytic converters.

The crime has parallels to the theft of copper wire from municipal property and telephone systems that reached a peak about 10 years ago.

In 2011, the B.C. government approved Canada’s first provincial metal theft law — the Metal Dealers and Recyclers Act — which is what police want amended to include catalytic converters as a regulated item.

Someone trying to sell metals such as copper now must present personal identification to a scrap dealer, who in turn has to share purchase details daily with police.

Purchasers who fail to register with the Province and fulfil record-keeping and sharing requirements risk fines of up to $100,000, as well as up to six months' imprisonment.

Police say theft of converters is a dangerous crime for thieves.

In Port Coquitlam in July 2019, neighbours heard grinding noises on the street before two vehicles caught fire in what police believe was a failed attempt to steal the devices.

Glacier Media also heard of a recent unconfirmed report of a person in Burnaby dying after being trapped under a car during an attempt to steal a converter; Burnaby RCMP had not responded to a request for information on the report prior to the posting of this story.

The VPD belongs to a working group lobbying to get changes made to the Metal Dealers and Recyclers Act and has consulted Calgary Police Service, which police say has had success in making legislative changes to curb metal thefts in Alberta.

To avoid being a victim of a converter theft, police recommend parking vehicles in garages or a secure parking lot. If that is not feasible, then park in a well-lit area.

For businesses, employees should park in a fenced off area that is busy during the day and secure at night. Hiring security patrol is also recommended.

At shopping centres or similar parking lots, police recommend motorists park close to the entrance of the building or near the access road where there is vehicle traffic and pedestrians.

Note: This story has been updated since first posted to reflect information received from ICBC.