B.C. store bans anyone who has received COVID-19 vaccine

The Kelowna businessman made headlines earlier this year for posting a "no face masks allowed" sign.
Apr 22, 2021 10:30 AM By: Nicholas Johansen / Castanet 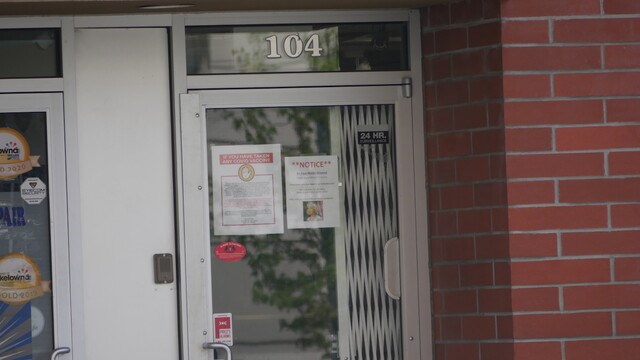 Sun City Silver and Gold in Kelowna. A sign has been added to the store, banning people who have been vaccinated for COVID-19 from entering.Rob Gibson

A Kelowna business owner who flouted public health orders by banning face masks in his store has now barred those who've received the COVID-19 vaccine from entering as well.

This week, Merrill added another sign to the store, banning people who've been vaccinated for COVID-19 from entering.

“We don't want to be sick, the people who are vaccinated can shed the virus,” Merrill said. “It's going to be a serious issue ... it's already an issue.”

Back in February, another local business also expressed concerns about “viral shedding” from the COVID-19 vaccine, but Interior Health's chief medical health officer Dr. Albert de Villiers said there's no risk of this from the mRNA COVID-19 vaccines, as the vaccine does not use any "live virus."

"There are some vaccines that are live vaccines, where after you get the vaccine, you can shed the virus because it's an actual live vaccine,” Dr. de Villiers said. “With the COVID-19 vaccine and the flu shot — no."

But Merrill says he's not alone in his opposition to the new vaccines, and he doesn't think the new mandate at his store will hurt his business. In fact, he says his no-mask policy from earlier this year has been a boon for his silver and gold bullion selling.

“[People are] deliberately stopping in to do business here, or driving across town,” Merrill said. “They want to do business with someone who is awake.”

He believes 75 per cent of Canadians will choose not to take the vaccine, which he refers to as an “experimental potion.” But a recent random national survey found that 64 per cent of Canadians polled would take a vaccine as soon as possible, or they already have, while eight per cent said they would never take it.

Merrill concedes that he's not a doctor, but says that most doctors are “quacks.” He also questioned whether Dr. Henry is a real doctor, calling her a “shill.”

He says he'll be enforcing his new rule as best as he can by taking people at their word.

Merrill was sentenced to 90 days in jail last year after he was found guilty of failing to file four years' worth of income tax. During trial, he argued he wasn't a “person” under Canada's Income Tax Act, but the judge dismissed his arguments as “straw man logic” that “defies any rational response.”

Notably, the man responsible for organizing the anti-mask and anti-lockdown rallies in Kelowna over the past year, David Lindsay, has also spent time in prison for refusing to file income taxes.