By Jan. 14, four cases of the U.K. variant have been found in B.C.; researchers say as few as 20 could signal the variant is on a path to dominate the province, prompting a call to tighten border security and surveillance of returning travellers
Jan 15, 2021 3:40 PM By: Stefan Labbé 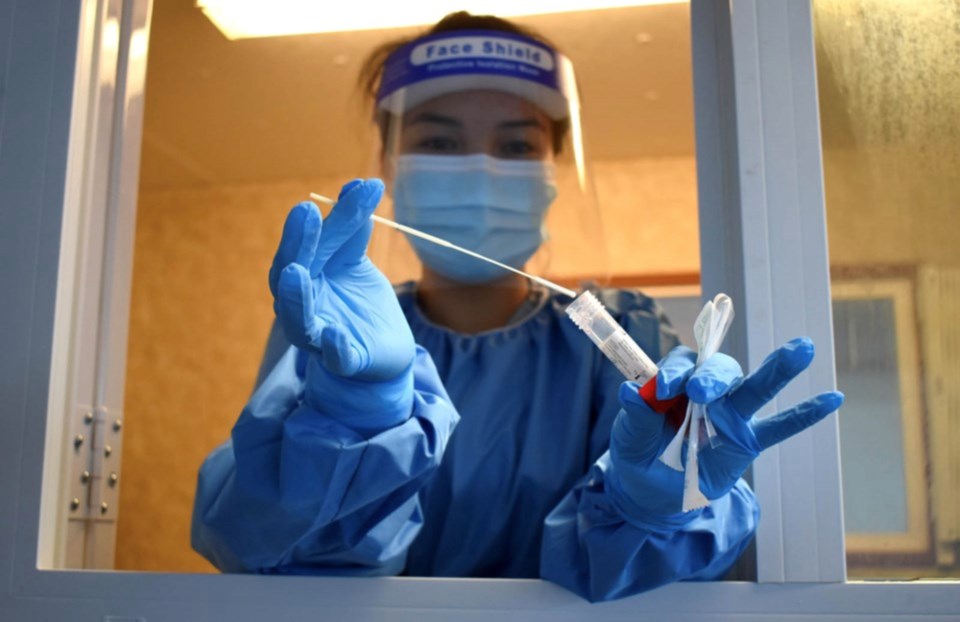 An LPN on-site at a COVID-19 testing site close to the Vancouver International Airport. Researchers say B.C.'s porous borders need to be shored up to prevent the takeover of a new U.K. variant of the coronavirus.Maria Rantanen

British Columbia could see up to 5,000 cases per day by March should a highly contagious variant of the coronavirus establish itself in the province, according to recent modelling conducted by an SFU infectious disease researcher.

Mathematician and epidemiologist Caroline Colijn has been tracing the trajectory of the virus in everything from B.C.’s schools to the wider population. Her latest model, seen by the Tri-City News, assumes a highly transmissible variant from the United Kingdom moves into community transmission in B.C. by Jan. 25.

“The picture looks like what we have now until late February and then it kind of just skyrockets,” said Colijn. “It’s pretty worrying.”

Fellow UBC mathematician and disease modeller Daniel Coombs, who has reviewed Colijn’s model, said a threshold of 20 to 50 cases would almost certainly indicate the new variant is here to stay.

As highly transmissible version of the virus, B.1.1.7 has been shown to spread from 50 to 70% faster than the strain currently in B.C. It has overwhelmed many U.K. hospitals and led to widespread travel restrictions and bans on passengers from the country.

WILL VACCINES STOP THE NEW VARIANT?

To date, there's no evidence that currently approved COVID-19 vaccines won't be effective against the U.K. variant. What concerns infectious disease experts is the speed at which it is spreading: without enough vaccine to go around, another highly contagious wave of COVID-19 could sweep through the population before it reaches herd immunity.

Considering where B.C. is in its vaccine campaign, Colijn did not integrate vaccination into her model; the effect of B.C.'s immunized population, she said, would be negligible because health officials are targeting those most at risk of dying and not populations most likely to spread the disease.

But while Coombs said he doesn’t think B.C. can keep the U.K. variant out of the province indefinitely, he still holds hope vaccine campaigns could keep B.1.1.7 at bay.

“The more shots we can get in arms before it takes over the better chance we have at undercutting explosive growth of the U.K. variant,” said Coombs. “There’s sort of a race going on.”

The growth of a new variant in B.C. — including the less understood South African variant — depends on when it arrives and how it’s contained, said Colijn — variables health officials are now assessing in jurisdictions around the world.

On Friday, the U.S. Centre for Disease Control and Prevention sounded the alarm, warning the U.K. variant of the coronavirus would take over as the dominant source of infection across the country by March. And in Ontario last week, a mathematical biologist at Queen's University in Kingston, Ont., found the variant could govern the pandemic in that province as soon as late February.

While the U.S. has isolated fewer than 100 cases of the U.K. variant, its capacity to find it through genome sequencing is patchy when compared to the rigorous sampling currently taking place in the U.K., said Coombs. Canada, including B.C., sits somewhere in the middle, he added.

“Because we have slightly better sequence-based capacity, we may still be in that very early phase. One person shows up, there’s always aspects of chance. How strictly did they follow quarantine?” he said.

Stop inter-provincial travel, tighten up provincial and international borders, and ask members of a household to quarantine with returning travellers — do that, and “we might be able to win that race,” warned Colijn.

“We’d have to do those things and we’d have to do them now,” she said, otherwise, thousands of new cases a day could be a terrifying reality by spring, even under current health orders.

With a relatively strong public health capacity, Colijn said B.C. has the potential to act in time.

“There’s definitely a chance that we can win that race, but we’d have to do fairly strong actions that we haven’t been willing to do for regular COVID.”

The province, for its part, has sent mixed messages on how it plans to tighten restrictions around travel.

On Thursday, Premier John Horgan said his government is seeking legal advice on whether it can limit non-essential travel from people out of province during the pandemic.

But in responding to questions from reporters only a few hours later, provincial health officer Dr. Bonnie Henry said she has no plans to issue a public health order restricting travel, though she did liken the arrival of the two new variants to this time last year when travellers first started bringing the coronavirus to the province from countries like China, Iran and the U.S.

"It does show that we are connected," said Henry. "We are not by any means out of the woods."

— With files from the Canadian Press