A cafe helping people in need says pay what you can 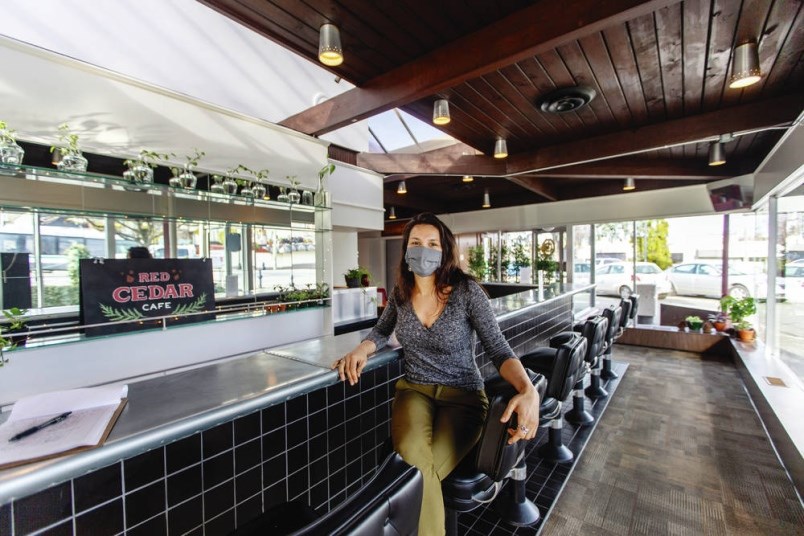 Liz Maze is co-executive director at the Red Cedar Cafe, which turns out about 3,000 meals per week for those in need, in return for whatever they're able to pay. Darren Stone / Times Colonist

A tropical-themed cocktail lounge and a non-profit cafe to feed those in need have opened in formerly empty spaces in a Douglas Street motel bought by the province last year for social housing.

Victoria’s non-profit Red Cedar Cafe has settled into the ground level in the former Paul’s Motor Inn at 1900 Douglas St., where it turns out about 3,000 meals per week for seniors, ­people with disabilities, those who are self-isolating, people who have lost their jobs, ­homeless campers and more.

There’s no set price for the meals. People pay what they can, and the cafe runs on the honour system, assuming that anyone requesting help needs it.

The organization was founded in April by people with ­experience in hospitality and community organizations to help those who lost jobs and work hours as a result of the pandemic. First located in the old Willie’s Bakery and Cafe at 537 Johnson St., it temporarily used the kitchen at the former Comfort Inn before relocating to its current roomy premises late last year, at a discounted rental rate, Maze said.

Since starting up, it has provided about 75,000 meals, she said. Today, the organization has 12 staff and 450 volunteers, and has received support from local and provincial governments.

Every morning and evening, 120 hot breakfasts and dinners are taken to nine locations where campers are living.

The Capital Regional District pays for the food, while the Umbrella Society takes the meals to ­campers.

On Sundays, volunteers head out to drop off seven frozen meals each plus other groceries to 140 households via contactless delivery.

Recipients can order online, just as if they were ordering from a restaurant.

“To me, it feels like any other restaurant,” Maze said.

The diner in the building is also open, offering soup, hummus plates and pastries on the pay-what-you-can system. Each booth has an electrical outlet so customers can access wi-fi or charge devices. “Everyone is welcome,” Maze said.

Free food is set outside as well, and the cafe is also taking on catering jobs.

Now that the operation is well established, it plans to seek charity status so it can apply for grants and give out tax receipts to donors, something it cannot do now, Maze said.

While local grocery stores and farmers provide much of the food, the Red Cedar Cafe also has to buy supplies, and relies on donations from organizations and individuals to keep the operation running.

Maze said that the organization receives about 24 cents each for meals, which typically cost $5 to provide.

The cafe has a good relationship with residents of the adjacent social housing, who use the diner, she said.

Upstairs in the former Copper Owl lounge, Tim Siebert and Jessa Gildersleeve have opened Citrus and Cane lounge, which features art deco design, reflecting the history of the space, and ornate and colourful decor.

The lounge offers a wide range of tropically themed exotic drinks. Siebert said the goal is to create an atmosphere of escape from the everyday world. “We wanted to provide a new idea of drinking in Victoria,” he said.

The renovated lounge, with 50 seats, opened in mid-November, and Siebert said business has been good. He said there have been no problems with the adjacent social housing complex, operated under contract for the province. There is 24-hour security on site, provided by the province. “For us it has been totally fine.”

Gildersleeve and Siebert have leased the lounge since last January, closing until November to spruce up the location. “We put our life savings into a dream,” Siebert said.

Including the owners, the lounge has nine staff, and it’s open Thursday through Monday. When the pandemic crisis is over, the aim is to open daily with longer hours.