For Cornwall, G7 summit brings mix of disruption and hope

FALMOUTH, England (AP) — Towering steel fences, masses of police, protests on the beach: The Cornish seaside’s turquoise waters and white sandy beaches are looking decidedly less idyllic this week as leaders of the Group of Seven wealthy democracies
Jun 11, 2021 2:42 AM By: The Canadian Press 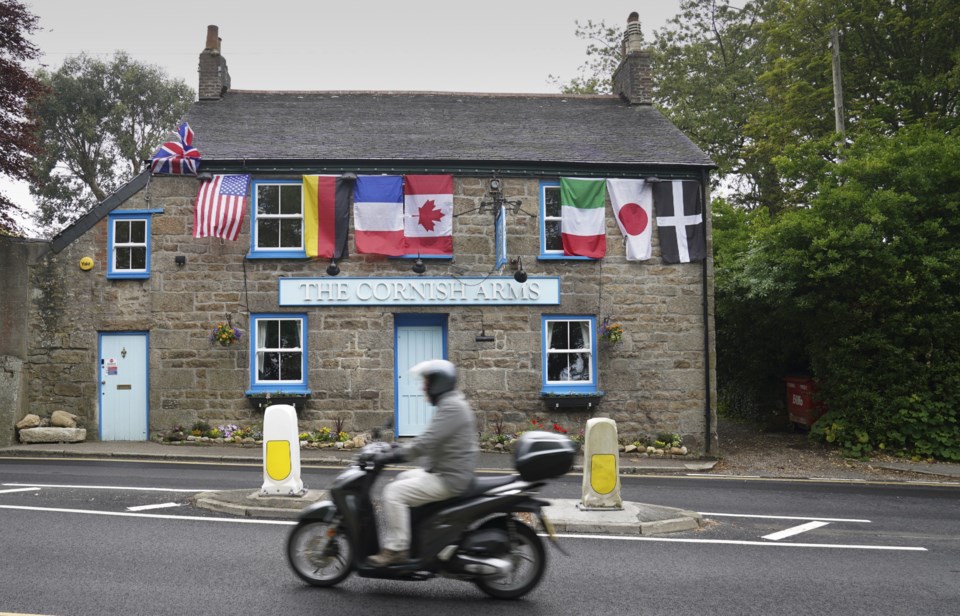 FALMOUTH, England (AP) — Towering steel fences, masses of police, protests on the beach: The Cornish seaside’s turquoise waters and white sandy beaches are looking decidedly less idyllic this week as leaders of the Group of Seven wealthy democracies descend for a summit.

U.S. President Joe Biden and leaders from Canada, France, Germany, Italy and Japan are arriving for three days of talks starting Friday at the tiny village of Carbis Bay, near St. Ives in Cornwall. The region is a popular holiday destination in the southwestern tip of England known for its long, picturesque coastline, its mild climate — and a savory pastry called the Cornish Pasty.

Locals may be used to crowds and traffic jams during the peak summer tourist season, but the disruptions caused by the summit are on another level. A naval frigate dominates the coastline, armed soldiers guard the main sites and some 5,000 extra police officers have been deployed to the area. Authorities have even hired a cruise ship with a capacity of 3,000, moored offshore, to accommodate some of the extra officers.

A main road is closed for the whole week, and local train lines and bus services have been shut down. A 3-meter (10-foot) tall metal fence nicknamed the “ring of steel” has been erected around Treganna Castle in Carbis Bay, where world leaders will stay. Security is also tight in the nearby town of Falmouth, the main base for international media covering the summit.

“This is just a totally surreal experience, the amount of police presence is phenomenal. It’s got to be the safest place in the country to be at the moment,” said Sue Bates, 64, who was relaxing on the beach Wednesday. Her husband, John, said they felt their holiday cottage shake when helicopters flew over.

“I feel sorry for the consequences that it is having on locals, I understand that some of the restaurant staff can’t get in to work during the period of the G-7, which is pretty unfortunate,” she said.

Still, Bates and others said they believed the long-term benefits of promoting tourism and local businesses to the world will be worth the hassle.

Britain’s government hopes the summit will bring 26 million pounds ($37 million) in tourism growth to Cornwall, one of the poorest regions in the country — and the whole of western Europe. Despite its upmarket restaurants and luxury holiday cottages, some neighborhoods are among the poorest 10% in England. Wages are below the national average and child poverty is high in areas not far from St. Ives' waterfront.

The summit has been a boon for local hotels and guesthouses, which have just recently been allowed to reopen after months of forced closure under the U.K.’s COVID-19 lockdown restrictions. All rooms were booked up months in advance by visiting media and officials.

For a small business like The St. Ives Co., which has been chosen to supply gift hampers for some of the world’s most powerful leaders, it’s a dream opportunity.

“When we’re like, Joe Biden’s going to be using our toiletries, you almost have to keep saying to yourself -- it’s happening, we are doing this,” said co-owner Tegen Mackay.

Others aren’t so happy. A local fisherman, Ian Jepson, told British media he was turned back by a warship and told he couldn’t fish in the waters because of an “exclusion zone.” And Andrew Narbett, who operates tourist boat trips on his boat Tiger Lilly, said many bookings had been canceled and he will not bother operating during the summit.

“We were fully booked yesterday and throughout the day we had a lot of cancellations where people were travelling down the A30 (main route) and seeing signs saying ‘major disruptions,’” he said.

Some see the summit as a chance to promote Cornwall’s emerging sectors, especially its green businesses. Climate change is among the top issues on the summit’s agenda, and Britain’s government has said Cornwall was chosen as the host venue partly because it is “already a powerhouse for green innovation.”

Glen Caplin-Grey, who heads the Cornwall and Isles of Scilly Local Enterprise Partnership, said he’s keen to showcase the region’s low-carbon businesses like offshore wind farms and lithium mining. Lithium is a key component in batteries for electric vehicles.

“What the last year has shown, in terms of the pandemic, is that there’s an over-reliance on tourism here,” he said. “It’s great that people want to come and visit, but it’s really important to look at other higher wage sectors as well."