WB decides to close for the remainder of the season following three-week shut down government directive
Apr 1, 2021 12:00 PM By: Alyssa Noel 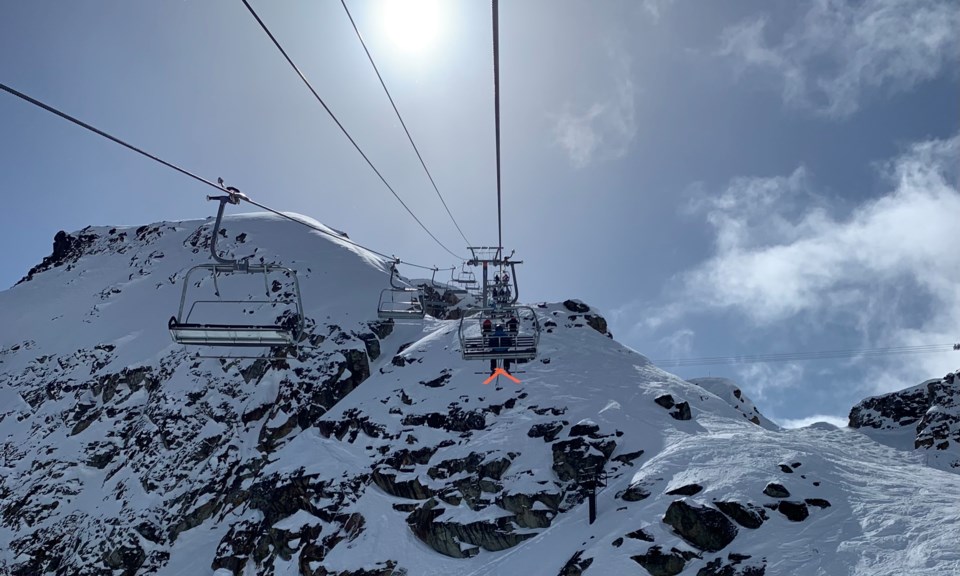 Skiers and snowboarders didn’t know it at the time, but March 29 wound up being the last day of the season at Whistler Blackcomb.Photo by Megan Lalonde

After 24 hours characterized by surprise, a little déjà vu, and scrambling, Whistler Blackcomb (WB) officially made the call to end the 2020/21 ski and snowboard season late Tuesday afternoon, March 30.

The announcement came after the province ordered the mountain to close for three weeks as part of a provincial health order that also paused indoor dining at restaurants and liquor-serving premises, adult group fitness activities, and indoor worship services. Whistler was the only community to have its ski hill shut down as part of the new restrictions.

With the latest public health orders in place until April 19, it meant that the season was definitely over for Whistler Mountain—which had already been slated to close on April 18—but there was a glimmer of hope that Blackcomb Mountain might reopen until its original closing day of May 24.

But, said Geoff Buchheister, vice president and chief operating officer of WB, in a March 30 release: “While the Provincial Health Order caught us all by surprise, we fully support the government’s direction and we’re doing our part to comply.

“At this time, we believe the best thing we can do to support the order is to begin winding down winter operations. We did not make this decision lightly as we know our employees and our community put so much effort into following our COVID operating guidelines so we could safely operate this season. Our full attention will now turn to getting our resort ready to safely open for summer.”

In a letter to guests, Whistler Blackcomb said Epic Coverage terms and conditions may apply if guests booked a priority reservation day before Dec. 15, 2020 to ski or ride between March 30 and April 4.

If you qualify, Vail Resorts will automatically refund you with no actions required.

Pass holders will receive an email about eligibility for the rollover refund after the Resort Closure & Cancellation refund is processed in mid-May.

“If you also booked a Ski and Ride School lesson, our team will be addressing your reservation and refunding unused lessons,” stated the letter. “No further action is required.”

WHAT’S BEHIND THE CLOSURE

The new health order to close the mountains was prompted by increasing numbers of positive COVID-19 cases in the resort, visitors catching the virus in Whistler and bringing it back to their home communities, and a spike in the P1 Brazil variant locally, said Dr. Bonnie Henry, provincial public health officer, during her update on Monday, March 29.

“We’ve seen increasing cases again in the Whistler Blackcomb area, despite testing, contact tracing Vancouver Coastal [Health] and the community have been doing together to try and support people to isolate and to prevent transmission, and the immunization program that we’ve started in the worker accommodation in Whistler.

“Unfortunately, this has not been enough and we’re starting to see cases increase again in that community, particularly in the last week with the more worrisome cluster of the P1 Brazil variant of concern.”

Last week, from March 22 to 28, the health authority identified 218 new cases of the coronavirus in Whistler. That brings the total number of people who tested positive for COVID-19 in the resort municipality from Jan. 1 to Mar. 28 to 1,120.

Of these, 900 individuals have since recovered from COVID-19. According to VCH, the vast majority of Whistler’s cases—83.2 per cent, to be specific—continue to be identified in young adults aged 20 to 39 years.

Comparatively, the resort recorded 271 cases in the entirety of 2020.

Vancouver Coastal Health was unable to provide numbers of the Brazil variant in Whistler cases by press deadline.

While the trickle-down effect of the mountain closing impacts every business in town, the restaurant business was dealt a particularly strong blow with the March 29 health orders to cease indoor dining and stick to strictly takeout, patios, or delivery.

“I have been amazed at how the restaurant sector has continued to rise to the challenge, so I expect they’ll do it again,” Crompton said. “But, in some ways, that feels like I’m diminishing what a huge ask it is. I simply cannot imagine a bigger request of them than to take this on again. My hope and expectation is that local, provincial, and federal governments will be there to continue to support them in getting to the other side.”

For her part, Melissa Pace, CEO of the Whistler Chamber of Commerce, said that while she understands the importance of keeping the community safe, the news came as a shock to everyone.

“Government needs to find a better, more timely and effective way to communicate information, allowing those affected time to prepare,” she said. “Twelve hours is not enough time.”

In the 24 hours since finding out about the new restrictions, the chamber set to work with community partners to organize a Zoom meetup on April 7 from 10 to 11:30 a.m. called Advocacy in Action: Food & Beverage.

It will include a panel of speakers including MLA Jordan Sturdy, Ian Tostenson, president and CEO of the B.C. Restaurant and Food Association, Eric Griffith, president of the Restaurant Association of Whistler, Jackie Dickinson, executive director of the Whistler Community Services Society, and RMOW Councillor John Grills. (The event is free, but requires registration. Stay tuned to whistlerchamber.com.)

“The intention of this meetup is to find out what’s happening on the ground so that, as leaders, we can continue to better advocate for our businesses during these unprecedented times,” Pace said.

On top of that, the chamber will work to make sure businesses have timely access to existing grant programs and more clarity on the timeline for the federal Canada Emergency Wage Subsidy and Canada Emergency Rent Subsidy programs.

While the accommodation sector was gearing up for a busy weekend (by COVID-19 travel standards), Saad Hasan, president of the Hotel Association of Whistler, said he expects many of their member hotels to switch to capital projects and deep cleaning during the three-week lull.

“Our immediate reaction is to take care of our guests,” he said. “Many haven’t even checked out yet … Some people may still come. It’s not that there have been en masse cancellations. Some people have stayed over and are just enjoying the beautiful day.”

Griffith, meanwhile, said there’s been a range of emotions in the local restaurant scene, but everyone is jumping into action.

“Our group [RAW] is focused this week on dealing with operations, making sure everyone is taken care of, and deciding what everyone is going to do for the next few weeks,” he said. “We’ll be meeting and communicating regularly and the biggest thing is we’re supporting each other.”

While he was contemplating shutting down his restaurant, Alta Bistro, rather than switching to take out, he said other businesses have positioned themselves for takeaway and delivery over the last year.

“The products on offer are amazing,” he said. “A lot of new [products] have come on the market from restaurants that might not have been doing takeaway before.”

There are some other reasons to be optimistic, he added. For one, many industry workers are vaccinated. But also, compared to this time last year, the food and beverage sector is less shocked by sudden changes.

“We’ve all grown in fortitude and diversified our businesses,” Griffith said. “We’re not going to give up after three weeks. No way. We love Whistler and we know this town can bounce back.”

Another particularly hard-hit sector is gyms and fitness studios, which were ordered to suspend all group classes for three weeks.

“I was definitely surprised,” said Meghan Sutter, who owns Peak Training. “As far as I know, within Whistler, our gyms and studios have been very safe. As far as I know, there haven’t been any exposure risks, everyone is adhering to the rules and being super diligent with their cleaning and their management with people and flow.”

While she does a lot of one-on-one training, Sutter had been hoping to ramp up small-group classes. On top of that, many of the trainers who work out of her facility have also been impacted.

“We’re not very group-based, but that’s the direction we want to be able to go,” she added. “We were just starting to get some ground with the awareness of what we were offering. It feels like the rug gets pulled out from under you.”

Like Griffith, though, she’s quick to drum up some optimism for the future. “I’m looking forward to seeing the Whistler community resume,” she said. “I know there is support around us and I know the community is happy to step in and support businesses and keep them surviving.”

- with files from Megan Lalonde