According to the latest data released by the BC Coroners Service, there were 165 suspected illicit drug toxicity deaths across the province during the first month of 2021.

Seven of those deaths took place in Prince George after the city broke a 10-year record of 58 in 2020.

January 2021's provincial death count is the highest amount ever recorded during the first month of a new year and a 104 per cent increase over January 2020 (81).

"Stigma is driving people to use alone, and the pandemic is pushing people further into isolation," B.C. Minister of Mental Health and Addictions Sheila Malcolmson said in a statement.

"We stepped up our response to these emergencies as quickly as possible in B.C., but the effects of the pandemic on the illicit drug supply chain has made drugs dramatically more toxic than a year ago and, tragically, more lethal. We know people are hurting now and we have to do more to stop this terrible surge in overdose deaths."

The BC Coroners Service says Northern Health had the highest rates in the province during January 2021 with 71 deaths per 100,000 individuals. 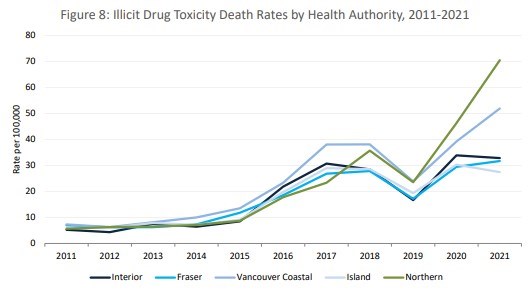 Illicit Drug Toxicity Death Rates by Health Authority from 2011-2021. By BC Coroners Service

The northern interior saw seven deaths followed by the northwest and northeast regions of the province, both with five.

"These figures are heartbreaking, both in scale and for the number of families who are grieving the loss of a loved one," BC Coroners Service Chief Coroner Lisa Lapointe said in a release.

"In the fifth year of this public health emergency, there is virtually no community in the province that hasn't been touched by this devastating loss of life."

The service says the number of deaths during the first month of the calendar year equates to roughly 5.3 deaths per day.

No deaths have been reported at supervised consumption or drug overdose prevention sites.

‘This can really save someone’s life’: Rural B.C. nurses trained to prescribe pharmaceutical alternatives to illicit drugs
Feb 10, 2021 8:35 AM