COVID cases above 300 for third week on North Shore 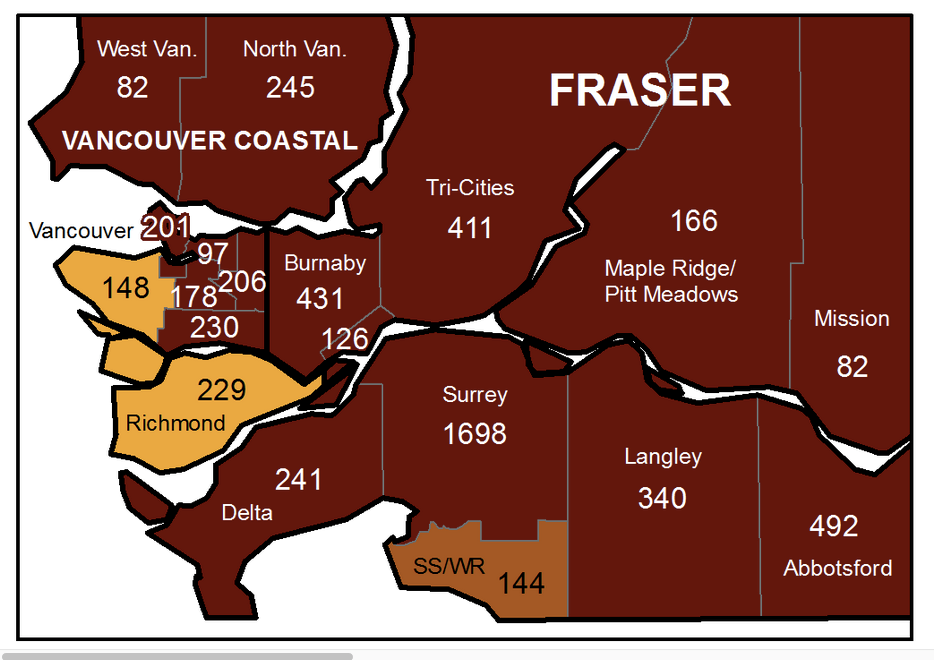 A map shows the geographical breakdown of COVID cases in the Lower Mainland for the week ended April 17.BC CDC

COVID case counts remain high on the North Shore this week, with 327 new cases of COVID-19 reported for the week ending April 17.

The number of cases on the North Shore is down slightly this week from the record high of 339 reported the previous week.

Of the cases reported in the past week, 245 are in North Vancouver and 82 are in West Vancouver, according to B.C.’s Centre for Disease Control.

Both North and West Vancouver now have an average daily infection rate of over 20 per 100,000.

According to information recently released by the BC CDC, the North Shore’s daily infection rate has been hovering around 30 cases per 100,000 people – a rate similar to the Tri-Cities area.

Case numbers remain high but stable throughout most parts of the Lower Mainland this week, although cases in hot spots of Surrey, Langley and Abbotsford were all up this week.

Cases in Whistler and the surrounding Howe Sound communities, including Squamish, continued to drop this week, with 131 cases compared to 337 cases reported the previous week.

While people in their 20s continue to make up the largest number of COVID cases provincewide, data from the BC CDC showed that some of the biggest recent increases in rates of COVID infection have been among teenagers and children.

The median age of hospitalization for the week ending April 10 was 60, with the median age of those in critical care at 59. People in their 50s are making up an increasing number of those admitted to hospital in the Lower Mainland, according to health officials.

Deaths are still more likely in older age groups, although there have been deaths in all age groups except teenagers.

On Wednesday, B.C. marked the highest-ever number of people in hospital with COVID, 483, with 163 people in critical care.

In the Vancouver Coastal Health region, there are currently 2,459 active cases, including 136 people in hospital and 46 in critical care.

Lions Gate Hospital has been under increased pressure from the rising number of hospitalizations among COVID patients as well as those requiring critical care.