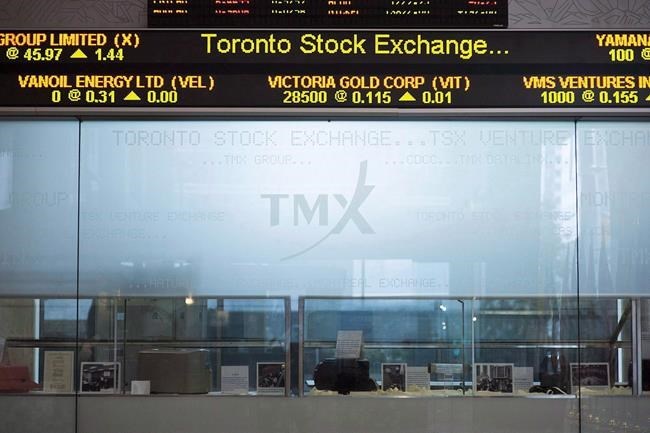 Markets pulled back for a second day since setting record highs.

"You can't go up every day but we don't really need an excuse to pull back after we've had such a strong start to the year," said Craig Jerusalim, portfolio manager at CIBC Asset Management.

Expectations of strong first-quarter earnings results in the coming couple of weeks prompted some profit-taking, he said in an interview.

"But I'd probably point to the scary virus counts in select regions as the primary concern weighing on stocks today."

The World Health Organization says the 5.2 million new confirmed virus cases over the latest week was the largest weekly count to date.

In Ontario, the government has implemented a strong lockdown as a third wave of infection threatens to overrun hospitals.

Canadian National Railway led the TSX lower as its shares decreased 6.3 per cent after the Montreal-based railway offered US$33.7 billion for U.S. railway KCS, potentially setting up a bidding war with CP Rail.

The effort could be a lengthy one, including a 10- to 16-month regulatory process.

"The rationale absolutely makes sense as it connects both ports and rails from coast to coast from Canada all the way down to Mexico but the likely permutations aren't over," said Jerusalim.

"There's still a lot of uncertainty and a lot of permutations that will likely need to unfold in this situation."

The date reminded investors how strong returns have been for the sector and might have also prompted some profit-taking, noted Jerusalim.

Whitecap Resources Inc. lost 6.5 per cent and Cenovus Energy Inc. was off 6.4 per cent.

The Canadian dollar traded for 79.54 cents US compared with 79.88 cents US on Monday.

Health care decreased 4.5 per cent with shares of several cannabis producers falling, including Organigram Holdings Inc. and Aphria Inc. down 10.1 and 8.6 per cent, respectively.

Technology also decreased with shares of BlackBerry Ltd. off 4.6 per cent.

Materials was one of five sectors that climbed. It rose on higher gold prices that pushed Oceanagold Corp. up five per cent and B2Gold Corp. up 3.5 per cent.

The trading day started in the aftermath of the federal budget, which Jerusalim described as a "pre-election spend our way out of the COVID contraction."

The budget targeted some of groups most impacted by the pandemic with an extension of rent and wage subsidies, a move to a $15 per hour federal minimum wage, taxation of vacant properties owned by foreigners and higher taxes on luxury cars and boats.

The Liberal government also said it would adopt a federal $10 a day daycare system similar to one in Quebec. Over the 20 years since Quebec implemented its system, female employment participation has swung from being two to three per cent below the Canadian average to three to four per cent above, said Jerusalim.

"If we can get the female participation rate in employment up to where Quebec levels are, that's going to be extremely stimulative for the Canadian economy and even though it's a big number to swallow in terms of the spend, it could end up helping overall growth."

This report by The Canadian Press was first published April 20, 2021.